253. The Accident by Linwood Barclay 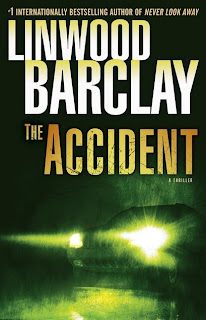 The Accident by Linwood Barclay

"It’s the new normal at the Garber household in Connecticut: Glen, a contractor, has seen his business shaken by the housing crisis, and now his wife, Sheila, is taking a business course at night to increase her chances of landing a good-paying job.

But she should have been home by now.

Waiting for Sheila’s return, with their eight-year-old daughter sleeping soundly, Glen soon finds his worst fears confirmed: Sheila and two others have been killed in a car accident. Adding to the tragedy, the police claim Sheila was responsible.

Glen knows it’s impossible; he knew his wife and she would never do such a thing. When he investigates, Glen begins to uncover layers of lawlessness beneath the placid surface of their suburb, secret after dangerous secret behind the closed doors.

Propelled into a vortex of corruption and illegal activity, pursued by mysterious killers, and confronted by threats from neighbors he thought he knew, Glen must take his own desperate measures and go to terrifying new places in himself to avenge his wife and protect his child."

Received a review copy from the publisher, Random House Canada.

I'm a little behind with Barclay and glad to have gone back and caught up with this title.  Barclay never disappoints me.  I can always count on him presenting an unusual crime and a thriller with many twists and turns.  The Accident, once again, delivers.  I'll just start by saying this wasn't my favourite of the author's as I didn't find it as intense as others I've read.  Oh, the twists and thrills were there but I just felt as if I knew they were coming just before they happened.  There are several related crimes going on here and I figured some of it out but the ultimate reveal I hadn't guessed, though I didn't find it too surprising by that point.  The whole playing out of what went down was quite the story though!  One thing I really enjoyed about this book was the main character's dealing with his wife's death.  He goes through the various stages of grief and he was a likable character.  Mind, he was explosive and had a temper, but his reactions to the astonishing unfolding of events while dealing with grief were very real and I enjoyed reading him.  So putting my ramblings together :-) another good thriller from Barclay, not his best, but good nevertheless.
Labels: 2011 Canadian author mystery thriller