249. A Tap on the Window by Linwood Barclay 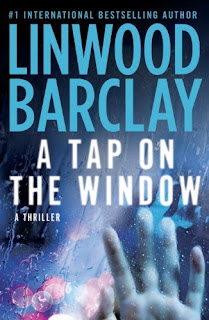 "It's been two months since private investigator Cal Weaver's teenage son, Scott, died in a tragic drug-related accident. Ever since, he and his wife have drifted apart, fracturing a once-normal life. Cal is mired in grief he can't move past. And maybe that has clouded his judgment. Because he made a grave mistake driving home on a very rainy night. A drenched young girl tapped on his window as he sat at a stoplight and asked for a ride. And even though he knew a forty-something man picking up a teenage hitchhiker is a fool, he let her in the car—she was the same age as Scott and maybe she could help him find the dealer who sold his son the drugs that killed him. However, after a brief stop at a roadside diner, Cal senses that some thing's not right with the girl or the situation. But it's too late. He's already involved.

Soon Cal finds himself mired in a nightmare of pain and suspicion. Something is horribly wrong in the small town of Griffon in Upstate New York. There are too many secrets, too many lies. And Cal decides to expose those secrets one by one."

Grr. I'm quite frustrated.  I wrote a nice long review of this a couple of weeks ago and I was just about to post it when POOF I lost it.  Now my memory is hazy and on top of that I've read another book by the author since so this is going to be hard to re-write the review.  So I'll keep it brief.  I loved this so much!  I did figure out a lot of what was going on but not the ultimate unsub and as usual Barclay throws in the twists and turns so the end is not what you think it's going to be.  This was a page turner for me; I just couldn't put it down,  Normally a book with over 500 pages intimidates me but with Barclay I look up and I'm at the halfway point before I even realise it.  It's been a while since I read Barclay and I'm so glad to get back on the wagon!  Sorry for the unusual brevity of this review.  Not Barclay's very best, but pretty high up there!
Labels: 2013 Canadian author mystery suspense