239. The Ones You Do by Daniel Woodrell 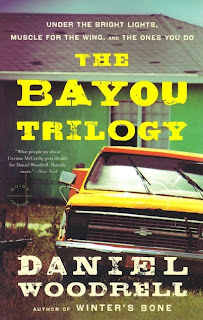 The Ones You Do by Daniel Woodrell.
The Bayou Trilogy, #3

"Recently jilted by his young wife, Rene's father, John X. Shade, has come back to St. Bruno. Broke, boozed-out and too shaky to hold the pool cue that once made his fame and fortune, John X. seeks the sons he abandoned years ago for more than an ordinary reunion"

This is the last book in the Bayou Trilogy and in Woodrell's career up to this point he had only written one book so far that was not in this series, A Woe to Live On, an historical fiction western set during the Civil War.  Since I've read all these books and others I feel confidant in saying this was Woodrell's first book that, while not set in the Ozarks, does have the classic southern Gothic noir feel of his later more famous titles.  Rene Shade, cop, was the star of the first two books but he is only a minor character in the finale.  Rene is on suspension and his future is left in limbo yet as a reader one can try to determine what they think he will do.  He is a complex character who loves being a policeman, is bound by honour both at work and home and this is why he may no longer be able to go back to being a policeman.  The main character of this book is John X. Shade, long time deadbeat father of the Shade brothers.  The 70yo man comes back home for the first time since he left his little family, with him is his 14yo daughter after his 27yo (I think) wife leaves him holding the bag for her crime of stealing a local kingpin's money.  John knows the man will be after him so he makes a desperate attempt to lose him and set his life to rights at the same time.  A wonderful character study of a classic type of man.  Born poor, a wrong-side-of-the-tracks kid who had one thing going for him (his looks), he causes a storm with his antics, gets two girls pregnant at the same time so marries the youngest, then lives the life of a professional gambler and womanizer, leaving discarded people along the way.  When he comes back to St. Bruno he has to face up to his past, while his past is haunted by his presence and his present runs him down.  A startling ending and by far the best book in the trilogy.  Woodrell's writing is ripe at this point for his Ozark themed books which would follow this one.
Labels: 1992 crime gothic noir southern fiction