230. The Fire Witness by Lars Kepler 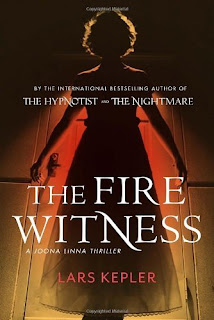 The Fire Witness by Lars Kepler. Translated by Laura A. Wideburg
Joona Linna, #3

"Psychologically tense and as fast-paced as The Hypnotist, the third book in the Joona Linna series by Lars Kepler is already a worldwide sensation, appealing to fans of Stieg Larsson and Jo Nesbo.

Detective Inspector Joona Linna, under internal review by the National Police for an alleged infraction, is on leave to solve some troubling personal business when he is called in to "observe" the investigation of a gruesome and strange murder at Birgittagarden, a youth home for wayward teenage girls. But it's not long before Linna is drawn deeply into the intricate, disturbing case. Intriguing, astonishing, and with all of the suspense that first captured audiences in The Hypnotist, The Fire Witness is Lars Kepler at his most psychologically complex and thrilling."

Absolutely shocking!  Perhaps the best thriller I've ever read!  Do I sound like I'm being over dramatic?  Perhaps, however I cannot write about Kepler's third book without gushing.  I read a LOT of thrillers and I'm not surprised very often.  I don't always figure it out, though I often do, but when I don't I'm usually close.  The Fire Witness absolutely astounded me!  I had no clue who the killer was.  Well, actually, I had an obscure little theory going which I thought I was pretty clever of me but then WHAM, BAM it all starts unravelling in the last about 30 pages and I couldn't have been more giddy with shock.  The case itself is also deliciously deviant and becomes more and more than what it first appears to be as the book continues.  There is one twist after the other.  I was on the edge of my seat for the whole ride.  This book brings a double whammy to the table though.  While we have the outstanding main case there is also a secondary case going on that involves Joona's life personally.  We were introduced to this topic in the last lines of "The Nightmare" and it is carried out through this book.  For the most part it stays in the background, while every now and then Joona thinks back upon it and we are given slightly more details on a mystifying horror that has dogged Joona's being for the past 12 years.  Hardly interrupting the main case it pops up just often enough for us to want to know what is going on.  Then at the end of the book when we know this case is being wrapped up, Joona's personal case takes centre stage and the set up for the next book is obviously laid on the table.  Creepy, creepy, creepy is all I can say.  Absolutely can't wait for the next book.  Please hurry!
Labels: 2013 mystery Scandi-crime thriller