234. Bobcat and Other Stories by Rebecca Lee 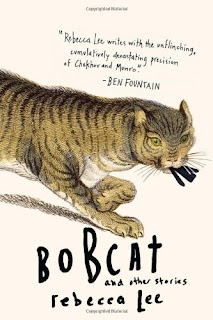 Bobcat and Other Stories by Rebecca Lee


"Rebecca Lee, one of our most gifted and original short story writers, guides readers into a range of landscapes, both foreign and domestic, crafting stories as rich as novels. A student plagiarizes a paper and holds fast to her alibi until she finds herself complicit in the resurrection of one professor's shadowy past. A dinner party becomes the occasion for the dissolution of more than one marriage. A woman is hired to find a wife for the one true soulmate she's ever found. In all, Rebecca Lee traverses the terrain of infidelity, obligation, sacrifice, jealousy, and yet finally, optimism. Showing people at their most vulnerable, Lee creates characters so wonderfully flawed, so driven by their desire, so compelled to make sense of their human condition, that it's impossible not to feel for them when their fragile belief in romantic love, domestic bliss, or academic seclusion fails to provide them with the sort of force field they'd expected."

In the brief one sentence blurbs about these stories in the publisher's summary I had no idea I would be reading about life in the late 1980s and the effects of Communism in China and the Eastern Bloc countries.  This is one of my main reading themes so needless to say I was well pleased with the subject matter.  I also found the stories to have a Christian component to them which left me thinking afterwards.  Rebecca Lee is a master at creating little worlds that suck you in and make you forget the real world while you are reading.  Each story was a unique experience where I found myself immersed in the characters' reality.  However, Lee is fond of ending her stories before any major event happens, just prior to an implied or impending climax.  This was startling to me at first and I often didn't "get" the point of these stories.  The author does use foreshadowing at times so that it is possible to deduce how the story would have ended yourself, sometimes.  This is what kept me from fully enjoying this collection.  However, Lee is a brilliant writer and I really was pleased to experience these literary microcosms.

One small note of contention: before I read the book I had it marked down as being by a Canadian author but upon receiving it can find no mention of Lee's Canadian identity whatsoever.  Why had I thought she was Canadian?  Upon reading it I found many of the stories have a Saskatchewan connection.  Going to the publisher's site I again could not find anything about Lee's citizenship or heritage.  She is presented as American.  Well after some digging I finally found an article where she acknowledges her Saskatchewan childhood and is "so proud to be considered part of this great tradition of Canadian writers".  That was with the publication of the 2012 Hamish Canadian edition of the book. Why not proud enough to even mention her birthplace in the author bio. on this US edition?  Hmmmm....


1. Bobcat (2010) - A dinner party is being held and the hostess who is pregnant ruminates about the guests individually and collectively as well as about her own marriage.  Beautiful writing, wonderfully told; I liked the narrator and felt her a genuine person as the thoughts about life and these people went through her mind.  The ending was startling and at first I didn't get it.  I thought about it and do "get" it but am not sure I understand the point.  However, the getting there was enjoyable.  (4/5)

2. The Banks of the Vistula (1997) - Engrossing.  A new student at a Lutheran college in the late 1980s is taking a Linguistics course and for her first paper, wanting to make an impression on the professor, plagiarizes it.  Turns out she copies verbatim an obscure piece of Russian propaganda from the 1940s which horrifies her professor who is an ex-pat. from Poland with a checkered past.  Fantastic story with great insight into the two main characters.  Only problem is, once again, I did not get the ending.  It just seemed to end at the point when something should have happened.  So, do I rate this a one for a complete let down of an ending or higher because I was thoroughly engrossed until the end?  (3.5/5)

3. Slatland (1992) - Finally, a story that I get!  Once again I was totally immersed in the world and characters that Lee lead me into.  A man and a woman, in love, living together for two years.  It's again the late '80s and the man is a Romanian refugee and he is constantly engaging the woman in conversation about how the Americans do not appreciate the life they have, Americans have no problems - Romanians *they* have problems.  He tells her what Communist life in Romania is like then what a fairy tale it is like in America.  All the references are to America but funnily enough the story takes place in Saskatchewan, Canada!  Without going into further detail, the woman starts to wonder if perhaps the man has a wife back in Romania and thus the story becomes more complicated.  As with the first two stories in this book, Lee has a way of abruptly ending her stories before they seem finished, however, this time I was satisfied.  We were let in on the character's intentions and understand what the final out come is.  I completely loved this one!!  One thing I need to mention and discuss is the professor psychologist the woman saw twice in her life, first as a child of 11 then later in the story as an adult.  The professor is an odd person and he is given a very creepy description from the first encounter. I came away thinking he might be a child predator.  At the second encounter Margit is just as uncomfortable with him and she again describes his strange demeanor, only this time I came away thinking she was misunderstanding him that he probably has Tourettes.  A *very* interesting character indeed!  My favourite story so far, even though it involved magical realism.  (5/5)

4. Min (1995) - Again takes place in the late '80s, this time in Hong Kong.  A girl is friends with a boy, Min, from Hong Kong on their Christian College Campus and he asks her to come home with him for the summer.  His father will pay for her ticket and give her a job.  So she goes, there is no misunderstandings as they have a purely platonic relationship and she knows that his family will be arranging his marriage next year.  She does find this arranged marriage bit very hard to comprehend and is flabbergasted when the father asks her to narrow down the entries to around 50, interview them and then leave them with a final list of ten to work with from there by the end of the summer.  This is her summer job!  Meanwhile she meets the ahma next door, a Filipino girl and eventually thinks that she and Min should meet each other, but the Chinese and the Filipinos have had a dislike for each other for centuries.  Another story in which I was completely immersed in.  Rebecca Lee has a way of sucking me into these little worlds inhabited by only a few characters who are so likable and real.  This story again ends before anything happens but we are given a foreshadow of what the future will hold; and like a happy dream I'm pleased to have awoken from it.  (5/5)

5. World Party (2013) - After I read this I started thumbing back to read snippets but, you know, I don't want to have to think and try to figure out what a story means.  I have to accept that Rebecca Lee ends her stories before they are finished and chances are I won't get the point.  But I love her little worlds!  Once again we are on a Christian College Campus, this time from a professor's point of view.  It is early 1980s and campus protests run around trees, pollution, apartheid and sexism.  The narrator belongs to a committee that votes on faculty members that "may be behaving badly" and they have such a meeting tonight.  She ponders about two of her friends, a female who is more outgoing than her and a male she is very close with and foreshadowing tells us he dies shortly after the time of this tale.  We are also told of her son's little Quaker school, her divorce and her son's "problem", probably Asperger's.  Rambling on here has helped me to see "the point" of the story which ends with her vote.  Wonderfully written, I just wish I felt satisfied with the ending. (4/5)

6. Fialta (2000) - This is probably the longest story in the book and once again concerns academia but in quite a different way.  A young man is chosen as one of a select few to study at a master architect's as an intern.  There are five of them I believe, two of them new this year the others second years.  The professor is an eccentric and one of his rules in no "fraternizing", so of course the young man falls head over heels in love with the young woman who is the architect's special chosen one.  The author narrates this story as a male and doesn't pull it off in my opinion.  I thought the narrator was a lesbian until it got around to identifying him as a male.  The author wasn't able to capture his masculinity, especially since the narrator's voice was the same as in all the previous stories in this collection which were female.  This is also probably the most simplest story included here with the ending being easy to understand.  It ends, as usual, before anything dramatic happens but the narrator foreshadows what will happen next leaving the story with a final ending for once.  I finally get the ending I've been wailing for and this turns out to be my least favourite story in the collection!  (3/5)

7. Settlers (2013) - This is the shortest story in the collection.  A 35 year-old single woman mulling over thoughts of her life which include her friends at a dinner party.  Specifically she's thinking about marriage and children. One friend has it all, another is settling into a strange partnership and the man our narrator likes she doesn't officially date though they go out together.  Then 8 years later, same people, same place, another dinner party.  The woman contemplates the same things: the perfect husband has repeatedly cheated on his wife, the strange couple are married and settled but not passionate, her ex-not boyfriend is more attentive than he ever was and she is married to a nice man and going through a protracted miscarriage, but that is ok because sometimes it is better to just pass through this world.  Depressing little story but the belief in God makes it more poignant than pointless.  Since this one is so short it is hard to fall into the little created world but still the characters are vivid.  (4/5)
Labels: 2012 2013 Canadian author realistic fiction short stories