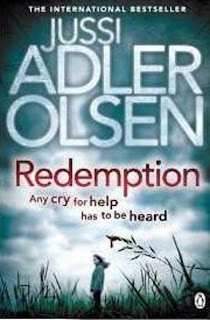 (UK) only
(Audible US) only

"Two boys, brothers, wake tied and bound in a boathouse by the sea. Their kidnapper has gone, but soon he will return. Their bonds are inescapable. But there is a bottle and tar to seal it. Paper and a splinter for writing; blood for ink. A message begging for help . . .

Her husband will not tell the truth: where he goes, what he does, how long he will be away. For days on end she waits and when he returns she must endure his wants, his moods, his threats. But enough is enough. She will find out the truth, no matter the cost to him - or to herself.

In Copenhagen's cold cases division Carl Mørck has received a bottle. It holds an old and decayed message, written in blood. It is a cry for help from two boys. Is it real? Who are they and why weren't they reported missing? Can they possibly still be alive?"

I just love this author and it was with great anticipation that I settled down to read the third installation of Department Q.  A fairly typical crime of kidnapped children and religious cults but an added twist brings it up a notch to a level we've come to expect from Jussi A-O.  I did find this book lacking just a tad compared to the previous two; it wasn't a page-turner for me as there just didn't seem to be a real sense of the unknown or dramatic time running out.  The reader knows the answers to the questions and follows along as the police catch up and discover what is going on.  I always felt I knew where things stood with the major crime and it just didn't have that *extra* special thrill for me.  However, I did enjoy the story and the book.  I'm comparing the third book to the first two.  A lot of time and effort is spent on the three main characters, delving into their personal lives and building their characters.  Assad has always been mysterious and now he's even more so, only there may be a shadow hanging over him that makes me wary of him now.  Carl's character takes major strides in working through his problems with a new psychiatrist, his love life improves and we learn more about that fateful night that changed his life forever.  Rose on the other hand gives us a conundrum right from the start which I figured out from the get-go so I was not too fond of that aspect of her character.  It could prove interesting in the future, though; I'll certainly be watching where this character goes!  So overall, a great story, I really liked it but since I've read the first two, it just didn't quite reach the standard they've already set.  Still looking forward to the next volume and hoping for another wicked crime!
Labels: 2013 mystery thriller