190. The Sixth circle of Heck, Precocia: Where the Smartypants Kids Go by Dale E. Basye 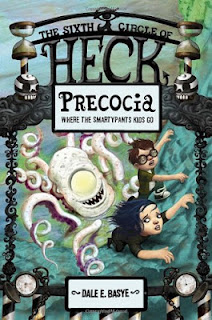 "When Bea "Elsa" Bubb, the Principal of Darkness, tells Milton and Marlo Fauster they've gotten too big for their britches, she sends them to Precocia, the circle of Heck for smartypants kids who grow up too fast. There, the children learn adult jobs. William the Kid teaches bill collection. Mozart teaches commercial jingles. And all the students are forced to act, dress, and talk like little adults. Soon, the Fausters realize that Precocia's vice principals Napoleon and Cleopatra want more than to hasten adulthood—they seem to want to eliminate childhood altogether. Can Milton and Marlo figure out their plan in time to stop it?

Heck is a school in the afterlife where bad kids go for all eternity, or until they turn eighteen, whichever comes first. As in Dante's Inferno, there are nine circles of Heck, based on kids' various vices."

At first I was of two minds as I read this entry in the Heck series as the author really went out on a limb and played out a plot involving alternate realities.  It made a good story in and of itself but I kept wondering what the heck (heehee) this had to do with the overall plot of the series and why we weren't in Heck anymore.  But Dale E. Basye manages to seamlessly bring it all together at the end; he had his fun with a wild plot and in the grand scheme it makes sense and takes the reader on a great adventure keeping the series fresh and exciting.  Remember this is the author who inserted *himself* into two of the books brilliantly!  Not anybody could pull that off and I've come to respect Basye as an author who knows how to write a series that the reader never knows what is going to happen next.  I love the title of the next book, "Wise Acres', and am thrilled to see it will be published at the end of this year (2013). Yeah!
Labels: 2013 death fantasy humour MG