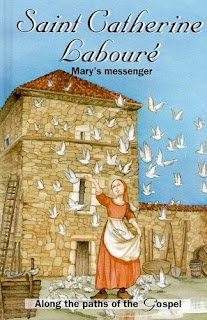 "When Catherine Laboure' was very young, her mother died. She learned that Mary, Jesus' Mother, would love and help her. Mary gave Catherine a message for all people, the message that Mary's love would help them in times of need. She will help you, too. Read this story to find out how the Blessed Mother visited Catherine, and how Catherine shared Mary's love through a very special symbol, the Miraculous Medal. Full color illustrations."

I love this little series of palm-sized picture books on a selection of Saints.  There are a lot of Saint Catherines and I never know which is which.  Laboure is a rather modern saint, having lived in the 1800s and being canonized in 1947, she had visions of Mary and brought to us the Miraculous Medal and the statue of Mary holding the earth in her hands.  These were requests made of her from the Blessed Mother herself and otherwise Catherine was a person, born of poverty, who dedicated her life to Jesus as a Daughter of Charity (a religious group started by Saint Vincent de Paul) where she spent her life especially dedicated to the poor and elderly.  Though a small book in size it contains lots of text and is completely illustrated in light watercolours.  As with each book in the series, the last page contains a special prayer to the Lord of thanks for Saint Catherine and an entreaty to her for her prayers. 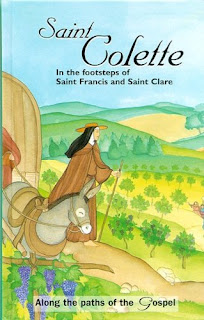 184 . Saint Colette: In the Footsteps of Saint Francis and Saint Clare by The Poor Clares of Poligny & Sister Elisabeth Charpy. Illustrated by Augusta Curreli. Translated by Caroline Morson.
Along the Paths of the Gospel

"Did you know that the name Colette comes from the name of Saint Nicholas? There was once a young woman named Colette who had a great desire to follow Jesus. She wanted to give him everything, just like Saint Francis and Saint Clare had. Colette became a saint, too! Find out how by reading her story. Full color illustrations on every page by Augusta Curelli."

I found this volume particularly charming.  Once again it comes in the uniform palm-size picture book format of the series, however this book seemed more simple to read and understand than the previous two books I read in the series.  This seems to set well with the simple, gentle life that Colette wanted and strove to life.  From her birth to her death, this brief book manages to cover quite a bit of territory in telling the hopes, dreams, travels and accomplishments of the nun who wanted to bring the Religious of Assisi back to the simple, poor lifestyles of their founders Francis and Clare.  With the Pope's permission she was able to do just this by building small monasteries and abbeys for them to live in while following The Rule.  Colette seems to have been a very simple, down-to-earth, God-loving woman who wanted to teach this simple way of loving and following Jesus to others.  As with the previous books in the series, the last page offers an intercessionary prayer to Saint Colette.  This is a lovely little prayer asking for help to love, pray, share and forgive.
Labels: 1998 2000 biography catholic children history picture books