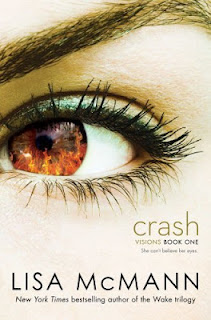 "Jules lives with her family above their restaurant, which means she smells like pizza most of the time and drives their double-meatball-shaped food truck to school. It’s not a recipe for popularity, but she can handle that.

What she can’t handle is the recurring vision that haunts her. Over and over, Jules sees a careening truck hit a building and explode...and nine body bags in the snow.

The vision is everywhere—on billboards, television screens, windows—and she’s the only one who sees it. And the more she sees it, the more she sees. The vision is giving her clues, and soon Jules knows what she has to do. Because now she can see the face in one of the body bags, and it’s someone she knows. Someone she has been in love with for as long as she can remember.

In this riveting start to a gripping series from New York Times bestselling author Lisa McMann, Jules has to act—and act fast—to keep her vision from becoming reality."

This is a book that grabbed me from page one.  I almost read the entire book in one sitting but got called away.  McMann is a good writer and her plots are unique and compelling; Crash follows suit and had me turning pages as fast as I could read.  I did find this a little melodramatic with the characters of the parents rather unrealistic.  Finding out the secret was good, but it`s just too hard to believe these adults would really behave this way.  This caused me to have to suspend reality to fully enjoy the intensiveness and creativity of the plot but I've enjoyed all McMann`s other books so much that I`m giving her leeway here.  This is not her best work but it is good and I look forward to the sequel which is entitled `Bang`.  I`d like to predict at this point that the final book will be called `"Boom". :-)
Labels: 2013 paranormal thriller YA