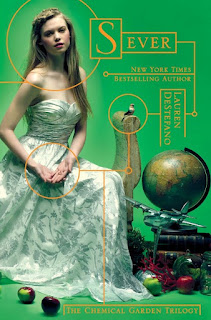 "Time is running out for Rhine in this conclusion to the New York Times bestselling Chemical Garden Trilogy.
With the clock ticking until the virus takes its toll, Rhine is desperate for answers. After enduring Vaughn’s worst, Rhine finds an unlikely ally in his brother, an eccentric inventor named Reed. She takes refuge in his dilapidated house, though the people she left behind refuse to stay in the past. While Gabriel haunts Rhine’s memories, Cecily is determined to be at Rhine’s side, even if Linden’s feelings are still caught between them.
Meanwhile, Rowan’s growing involvement in an underground resistance compels Rhine to reach him before he does something that cannot be undone. But what she discovers along the way has alarming implications for her future—and about the past her parents never had the chance to explain.
In this breathtaking conclusion to Lauren DeStefano’s Chemical Garden trilogy, everything Rhine knows to be true will be irrevocably shattered."

Absolutely compelling and satisfying conclusion to this dystopian trilogy.  I really enjoyed The Chemical Garden Trilogy; it offered something different than the usual YA dystopia.  In a world where females died at age 20, they are coveted for their reproductive abilities and lead lives of prostitution or lives of luxury as forcible sister wives to one man.  The characters of the women are really stressed and though there are male characters they do take a back seat to the women; Rhine and Cecily become the main focus in this last volume.  Their characters have developed tremendously since the opening book, from the experiences and hardships they suffered they have grown strong, in different ways, and ultimately the hope they both once had and lost is returned to them.  An amazing end, and a cautionary tale for our society seeking perfection in the human condition.  I look forward to DeStefano's next work and am hoping for a standalone to see if she can carry a novel with as much success.  Recommended for YA dystopia fans looking for something a little different than the common fare.
Labels: 2013 dystopia science fiction women's fiction YA