121. The Nightmare by Lars Kepler 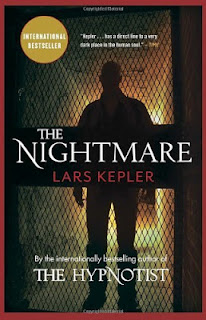 "On  a summer night, police recover the body of a young woman from an abandoned pleasure boat drifting around the Stockholm archipelago. Her lungs are filled with brackish water, and the forensics team is sure that she drowned. Why, then, is the pleasure boat still afloat, and why are there no traces of water on her clothes or body? The next day, a man turns up dead in his state apartment in Stockholm, hanging from a lamphook in the ceiling. All signs point to suicide, but the room has a high ceiling, and there's not a single piece of furniture around -- nothing to climb on. Joona Linna begins to piece together the two mysteries, but the logistics are a mere prelude to a dizzying and dangerous course of events. At its core, the most frightening aspect of The Nightmare isn't its gruesome crimes -- it's the dark psychology of its characters, who show us how blind we are to our own motives."

Brilliant.  I'm glad to get in on the ground floor with this writer as his books are being translated to English.  This is he most recent English release and the second in the Joona Linna series, with the next one coming out this (2013) summer.  A fantastic case of strange murder, suicide that may be murder and then a running tally of victims is connected to a political thriller that expands upon my usual fare of serial killer reads.  I'm not usual interested in political thrillers but that aspect doesn't come into play until well into the >500 page book that it's just one more twist to an intricate multi-threaded plot that leads in many directions before it all comes together in the end.

There are some inconsistencies with the first book.  In that one we didn't get to know Joona much at all with psychiatrist Erich Maria Barc being given the lion's share of character development.  Well, Eric is not in this book; he is mentioned in passing though not by name.  Joona has an arrogant catch phrase in the first book which has been dropped all together now instead of claiming that he is always right, the people around him seem to bolster his arrogance by telling him he is always right instead.  Much is made of Joona being a Finn in this Swedish police procedural.  I honestly can't remember this being mentioned at all in The Hypnotist.  Joona's character is fuller developed now and he has been given a background up to the point where a mystery is foreshadowed at the end which may be part of the next book's plot.

Even being a chunkster, this is a fast-paced read. One that keeps the heart pounding and the pages turning late into the night.  I adore the small 3-4 page chapters that make one fly from chapter to chapter and for some reason this set up makes it hard for me to put the book down when I see there are only 4 pages to the next chapter!  The case in The Hypnotist was more frightening; while this one is still thrilling it is quite different letting us know Kepler is not going to be following a cookie cutter plan for his series books.