110. The Thirteenth Rose by Gail Bowen 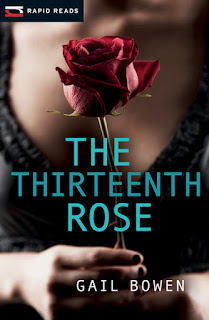 The Thirteenth Rose by Gail Bowen
The World According to Charlie D. (#4)

"For his Valentine's night call-in show, host Charlie D plans to offer his listeners two hours on the topic of "satisfaction." His in-studio guest is twenty-five-year-old Misty de Vol Burgh, formerly the highest-paid escort in the city but now happily married to eighty-three-year-old billionaire Henry Burgh.
It's all good fun until Charlie receives a chilling message: "It's take-out-the-garbage night. Time to kill all the hookers and wash the streets with blood." When Charlie is directed to a website that allows viewers to watch the murder of a prostitute in real time and promises that another killing will be broadcast live within the hour, the hunt is on. But The World According to Charlie D. has an audience of over a million listeners. The murderer could be anyone, anywhere. Charlie and his team have less than two hours to find and stop the killer."


This is part of a publisher's series called "Rapid Reads". These are very much adult books but are written on reading levels ranging from 2.0-6.0.  They are intended for adult literacy, ESL or persons simply looking for a one sitting read.  Honestly I didn't know what to expect from this particular book with an RL of 5.6.  The plot intrigued me and sounded like the usual serial killer thriller I like but ... would *I* enjoy a hi-low book for adults?  Yes!  I loved it.  A very quick read for me but also a highly intelligent, well-paced mystery/thriller (not for children!) from a popular Canadian mystery writer for adults (who I hadn't read before but am now eager to read).  I really enjoyed the character Charlie D.
Labels: 2013 Canadian author ESL mystery thriller