88. Island of Doom by Arthur Slade 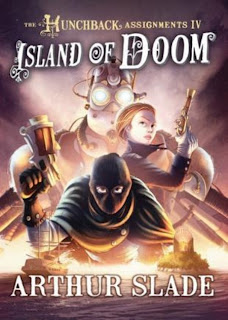 Island of Doom by Arthur Slade
The Hunchback Assignments, IV

"Modo is stationed in Paris, and is directed to follow the trail of a mesmerist and illusionist. In the course of his explorations Modo discovers that he is French and was born near Notre Dame. The revelation makes him question his allegiance to the very British Permanent Association.He forsakes his mission attempting to find his parents. The final scenes will be played out in the cathedral of Notre Dame, where Modo will learn his true origin. (Or is he merely manipulated by the illusionist?)"


The final book in this series is a splendid, rollicking adventure.  Almost every kind of derring-do meets our favourite team of 'Tavia and Modo as they travel from Montreal, Canada to France then London and end up on a South Pacific Island.  A mixture of steampunk and Frankenstein meet with the horrid collection of human and steel warriors vs super creatures sewn together from parts of corpses and enlivened by the maternal blood of Modo.  Even though it has been a year since last reading about Modo, I jumped straight into this volume and was hooked from chapter one.  This is one of those books that you wonder why you are reading so slowly then all of a sudden your brain just can't keep up with your hand's eagerness to turn the pages.  I'm very pleased with how everything has been finished off.  There is a satisfying final end but various threads are left to quietly dangle and any one could easily be picked up to start anew somewhere else down the line.  In fact, I've seen the work for the new Graphic Novel that will be coming out as a standalone story and can only say "Thank God" this really isn't the end for Modo!