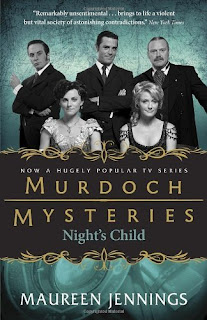 After thirteen-year-old Agnes Fisher faints at school, her teacher, the young and idealistic Amy Slade, is shocked to discover photographs in the girl's desk. One is of Agnes in a lewd pose, captioned "What Mr. Newly Wed Really Wants." When Agnes does not show up at school the next day, her teacher takes the two photographs to the police. Then Detective Murdoch, furious at the sexual exploitation of such a young girl, sets out to find the photographer and put him behind bars."


The seven books in this series have been re-issued with matching covers taken from the television series, which is pleasing for fans of the show but not always appropriate for the later books in the series as the characters shown are not all present once the series progresses.  This is actually my first read in this series but I'm no stranger to Murdoch.  I've watched the three movies which are based completely on the first three books in the series and I've watched the occasional episode of the television show which is not based on any particular book but is based on the characters from the books.  So as I read my fist acting Detective Murdoch mystery I was met with a cast of familiar characters and felt right at home.  I really enjoyed the book which set in Victorian Toronto Canada involves a crime centering around a ring of child pornography photographers whose crimes escalate to exploitation and much worse up to and including murder.  This is one of Murdoch's most deplorable cases and has many sidelines as well such as rising feminism, a unique form of labour union and Murdoch's continuous struggles with his love life.  The case wasn't exactly a mystery as we knew who one culprit was fairly early but the other was a surprise at the end and the book ends off with Murdoch's life taking on a whole new set of circumstances.  A great read for those wanting something just a little more than a cozy (but not too much) and for Victorian era fans.  Will most certainly be getting around to reading this whole series one of these days!
Labels: 2005 2013 Canadian author historical fiction mystery Victorian