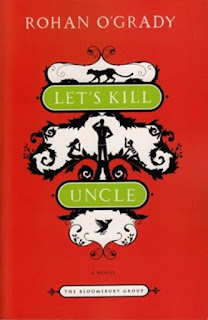 "When recently orphaned Barnaby Gaunt is sent to stay with his uncle on a beautiful remote island off the coast of Canada, he is all set to have the perfect summer holiday. Except there is one small problem: His uncle is trying to kill him.

Heir to a ten-million-dollar fortune, Barnaby tries to tell everyone and anyone that his uncle is after his inheritance, but no one will believe him. That is, until he tells the only other child on the island, Chrissie, who concludes that there is only one way for Barnaby to stop his demonic uncle: He will just have to kill him first. With the unexpected help of One-Ear, the aged cougar who has tormented the island for years, Chrissie and Barnaby hatch a foolproof plan.

Playful, dark, and witty, Let's Kill Uncle is a surprising tale of two ordinary children who conspire to execute an extraordinary murder-and get away with it."

A mistake people may make with this book is assuming that with the two main characters being ten years old that the book is going to be *for* children.  Well, it most certainly is not.  Barnaby and Christie are the focal characters and the action surrounds them but it is the secondary adult characters whom the reader is given more insight into their personalities, their backgrounds, what makes them tick.  This is a Gothic story, quite morbid, and everyone has a tragic story, but there is black humour to lighten the load and even though a Hollywood horror movie was filmed of the book, there is a certain tongue in cheek aura to the whole thing.  This book is certainly not going to be for everyone but with my delight in the macabre I found it entirely enchanting.  Evil Uncle is the villain, but all the "good guys" have their foibles or a certain something that makes them unlikable and yet I couldn't help but be charmed by them all.  And I loved the ending; it was a big "Ha!" and I thought it was funny; though some readers may find it annoying.  So not for everyone but I was very much taken with this macabre, quirky tale.