49. That Boy Red by Rachna Gilmore 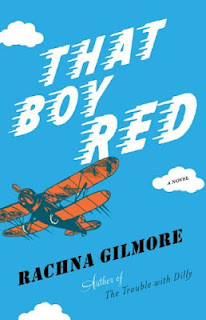 "It’s the Depression, but Red’s family is managing better than most on their Prince Edward Island farm. Hard working and resourceful, they have enough to eat and to help others, even if at times they are mocked by their neighbours for putting education ahead of farm work. Eleven-year-old Red has plenty of chores around the farm, and the days can be long, but he still gets the odd break to go swimming or fishing, provided his homework is done. Red’s older sister, Ellen, teaches at the local school, and if Red doesn’t shine, she will not only punish him, but also make sure their parents hear about it.

But then Red’s father’s hand is seriously injured and the family’s situation looks dire. Red steps up to the challenge, finishing the tobacco boxes that his father makes and helping shovel out a train stuck in the snow. Stubborn and even pigheaded, Red does make mistakes along the way (such as pretending to be dead so that his younger sister will stop following him), but his heart is always in the right place."

I was taken with how much I enjoyed this book; I just gobbled it up!  Once started I couldn't put it down.  Each chapter is episodic, there is no major plot running through the book, except that of the life of a family living through the Depression on Prince Edward Island.  The book is held together though by recurring themes in the lives of the characters, such as the love life of the eldest daughter, but the book is very much centred on the main male character and will be of especial appeal to boys.  The stories are similar to those written in the 50s/60s such as Henry Huggins, Homer Price and Soup, but Gilmore has brought more of an edge to these tales of growing up.  This coming of age story is more raw than those earlier others; people really get hurt, there is a life-like childhood meanness in the pranks and hi-jinks along with the real utter guilt and sorrow that follows.  The author's note tells us this book is based on her father-in-law's childhood giving it a certain authenticity along with the nostalgia.  One thing I really thought was brilliant was how the parents paid for the eldest child to go to college, then each sibling paid for the next one to follows' education.

A new edition with a much improved cover will be coming out this summer (2013); perchance it will be released in the US?

This book counts for my PEI book on my Reading Around the World Project and means I have, finally, now read a book in every Canadian Province/Territory.  Guess I'll start collecting titles for a second tour of Canada now.