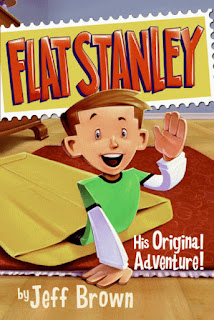 Publisher's Summary: "When Stanley Lambchop wakes up one morning, his brother, Arthur, is yelling.

A bulletin board fell on Stanley during the night, and now he is only half an inch thick!

Amazing things begin happening to him. Stanley gets rolled up, mailed, and flown like a kite. He even gets to help catch two dangerous art thieves. He may be flat, but he's a hero!"

Reason for Reading:  My son read this as his reader while I was away on vacation and I promised I would read it too.  I have read it before a few other times in the past.

Stanley's original adventure never ceases to amuse me and any child I have read it to for the first time has always found a lot of fun within these pages.  Yes, we can tell that the story is taking place in some that took place much earlier than our "here and now" and while contemporary when written it now adds a sense of vintage charm to the story.  When things were simpler, when people were politer and when they sorted out their grievances right quick even if it did involve a push and a shove.  The old-fashionedness didn't bother my son at all and I found it rather quaint. Stanley has fun adventures being flat; his brother Arthur is jealous at first but in the end Stanley just wants to be his regular self.  A fun story that started "The Flat Stanley Project".  The illustrations in this book are nice but they are not the originals which I will always prefer.  Fun book for early chapterbook readers with several more in this series plus a couple of spin-off series.
Labels: 1964 children fantasy humour