26. Speaking From Among the Bones by Alan Bradley 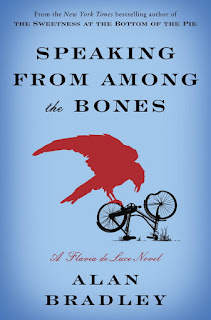 Speaking From Among the Bones by Alan Bradley (US) - (Canada) - (Kindle)
Flavia de Luce Mystery, #5

First sentence: "Blood dripped from the neck of the severed head and fell in a drizzle of red raindrops, clotting into a ruby pool upon the black and white tiles."

Publisher's Summary: "In the fifth book of the New York Times bestselling series, featuring Flavia de Luce, Alan Bradley pens his most chilling mystery yet, and introduces a new character into the mix whose actions will have lasting consequences on Bishop's Lacey, the de Luce family, and especially Flavia herself.

When the tomb of St. Tancred is opened at the village church in Bishop's Lacey, its shocking contents lead to another case for Flavia de Luce. Greed, pride, and murder result in old secrets coming to light—along with a forgotten flower that hasn't been seen for half a thousand years."

Acquired:  I received a review copy from Random House Canada.

One of my favourite times of the year is settling down with the new Flavia de Luce mystery and as usual this one didn't disappoint.  For the small British village that has more than it's fair share of murders, author Bradley keeps coming up with entertaining and unique scenarios that suspends belief at the reality of just how deadly the little hamlet of Bishop's Lacey has become.  Flavia is one of my favourite current detectives, charming, clever smart and just a tad morbid.  I really like how through the five books Flavia and her two sisters have grown and matured and that time is passing (though slower than in real time) and events are occurring in their lives making the characters' ongoing stories a part of the series as well.  As usual the murder was fun, with several possibilities and kept me guessing till close to the end.  Before I read this book I had heard that there was a 'cliffhanger' ending and that some readers were not too pleased.  All previous books have finite complete endings, so this 'cliffhanger', if you will, is indeed different but it hardly surprised me and was an inevitable plot story line that would have been disappointing had it not ever come to fruition.  I'm hardly displeased that the author chose to throw us that last line to let fans of the series know what direction the next book will take.  I know I'm very excited to see what happens with the de Luce family in the next book.  My favourite cozy series I'm reading at the moment!
Labels: 2013 Canadian author mystery