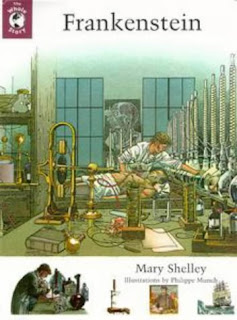 First sentence: "To Mrs. Saville, England; St. Petersburgh, Dec. 11th, 17--.  You will rejoice to hear that no disaster has accompanied the commencement of an enterprise which you have regarded with such evil forebodings."

Publisher's Summary: "Another outstanding title in the acclaimed series described as "a CD-ROM between covers". A deeply thoughtful study of the ethical dilemmas that knowledge can bring to humankind, Frankenstein also provides a portrait of modern science in Europe almost two centuries ago.

This edition of the enduringly popular tale, with its striking illustrations and extended captions unique to the Whole Story series, provides the background information modern readers could otherwise access only through a broad range of supplemental research. This distinctive approach places Frankenstein, first published in 1818, within the context of its era, bringing it vividly to life. A rich new reading experience is the result: readers can enjoy and understand the story in a way as close as possible to that of audiences when Mary Shelley wrote it."


Acquired:  Purchased new from an online retailer many years ago.

Reason for Reading:  I intend to read the upcoming non-fiction title "The Lady and Her Monsters" which is about the writing and background of the creation of the novel "Frankenstein" so I thought it would be best if I re-read the book to better appreciate the former.

I am a huge Frankenstein fan!  I first watched the Boris Karloff movie as a young child and have since seen it dozens of times.  I've seen all the MGM sequels and have a deluxe DVD edition with commentaries, etc.  I've also seen many, many different remakes, pastiches and parodies of the movie as well as reading Frankenstein themed retellings, comics and pastiches.  I have read this, the original book, once before when I was quite young.  It was one of the first books I took out of the library when I obtained an adult library card with special permission of my father at 12 or 13.  (You had to be 14, or in highschool, to get one at the time).  Needless to say at this point in time 30 years later, the movie version, specifically the James Whale (Boris Karloff) version is the one that I think of when I think of the Frankenstein story.

When I went into reading this book I knew that it was a totally different story than what my mind recalls from the movies but I also remembered that it started in the Arctic with the monster relating his story to Frankenstein.  So from this I was totally blown away with how incredibly different the actual story is to the conceived modern notion of the tale.  The book is told in narrative form from three different points of view and is a story within a story within a story.  Starting off with a mariner writing home letters to his sister as he starts an Arctic expedition and then becomes stuck in ice he recounts his tale and his meeting of Victor Frankenstein who stumbles upon them near death in his mad chase of his creature.  Then Walton, the mariner, recounts the tale that Frankenstein relates to him of his life.  The awful, hideous story of his wretched life.  Halfway through this recounting Frankenstein stops to relate the story the creature pauses to tell him of his life story since he woke from the "spark of life" and wandered into the world on his own.  Then it goes back to Frankenstein's narrative and finally ends again with Walton's letters.  This way we get both Frankenstein and the creature's tales from their own mouths, in their own words as they were related to the person they spoke to.

Neither Frankenstein or the creature are sympathetic which I found surprising, as in the movie I am deeply sympathetic to Karloff's monster.  But in the novel, he is a vile, wicked, murdering beast who at first thinks he has human compassion but quickly is turned from having any and easily finds violence and revenge better to his suiting when he is not treated fairly by others.  Frankenstein himself is simply mad, the quintessential mad scientist.  Obsessed with his creation he thinks of nothing else, working in solitude day and night until he completes his reanimation of life.  Upon first glimpse of this "life" he is so horrified that he runs from it and from this point on he becomes obsessed with finding it and destroying it, however the monster has developed his own lust for destroying Frankenstein and sets out to destroy him also, not bodily but in mind and soul by killing all who mean anything to him.

A frightening tale that shows the futility and madness at playing God with science, even though the book mentions very little about religion.  This edition I read from "The Whole Story" edition is a wonderful annotated edition which really brings the classics to life.  The annotations don't particularly help explain the story any better, though there are some pictures and definitions of some items and devices one may not be familiar with.  The main purpose of these annotations is to set one geographically and historically within the place and era that the book was written. Profusely illustrated with etchings and paintings of place names mentioned in the story one becomes immersed in the scenery and in this book particularly the Gothic feel comes to life.  Historically we see the prisons of the time period, meet the Romantic poets and artists who shaped the life of the author and the mood which carried over into this novel.  I really enjoy and recommend this edition, have several others in the series and would pick up any others I found, but unfortunately they are out of print at this time.