10. Captain Awesome and the New Kid by Stan Kirby 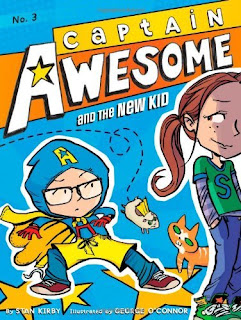 First sentence: ""Run!" Captain Awesome grabbed the Frisbee and raced for his life!"

Publisher's Summary: "Captain Awesome and Nacho Cheese Man are up to their old tricks...saving the universe through the defeat of one bad guy at a time. From Mr. Drools to Dr. Spinach, evil doesn’t stand a chance in Sunnyview! But when a new student named Sally Williams joins Ms. Beasley’s class, the boys wonder if she is friend or foe. Eugene also contemplates inviting a new feline friend to join the Squad… much to Turbo’s disapproval.
With easy-to-read language and illustrations on almost every page, the Captain Awesome chapter books are perfect for beginning readers!"

Reason for Reading: Next in the series.  My son read aloud to me as his reader.

I continue to be pleased with this series and my son continues to find the stories funny and not childish.  Being a 6th grade struggling reader it is hard to find material on his level that isn't babyish.  This series rarely mentions the ages or grades of the children involved and he never has a clue he is reading something the publisher's recommend for grades K-2.  The books certainly have a much wider appeal than that.  Each book introduces new characters and this one is no exception. Awesome and Cheese Man find a cat and start to adopt it and bring it into the Squad until they find out the cat`s brother is missing.  On the case, they cross paths with the new kid at school whose personality is rather "unique" and we have a funny adventure which ends with the possibility of a new member joining the Squad after all.  Not the best book in the series, (there is always something with 3`s) but still follows through leaving us both interested in reading the next book.  One of the best series around for the 2-3 reading level, no matter what the age of the reader, advanced or struggling.
Labels: 2012 children early chapter books superheroes