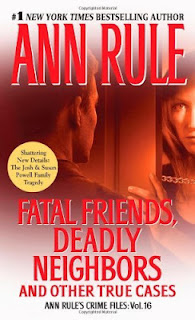 First sentence: "One of the questions I am asked frequently is "Don't you have nightmares about the cases you cover?"  Usually, I don't."

Publisher's Summary: "TOO CLOSE FOR COMFORT
It’s a chilling reality that homicide investigators know all too well: the last face most murder victims see is not that of a stranger, but of someone familiar. Whether only an acquaintance or a trusted intimate, such killers share a common trait that triggers the downward spiral toward death for someone close to them: they are masters at hiding who they really are. Their clever masks let them appear safe, kind, and truthful. They are anything but—and almost no one can detect the murderous impulses buried deep in their psyches.

These doomed relationships are the focus of Ann Rule’s sixteenth all-new Crime Files collection. In these shattering inside views of both headlined and little-known homicides, Rule speaks for vulnerable victims who relied on the wrong people. She begins with two startling novella-length investigations.

In July 2011, a billionaire’s Coronado, California, mansion was the setting for two horrifying deaths only days apart—his young son’s plunge from a balcony and his girlfriend’s ghastly hanging. What really happened? Baffling questions remain unanswered, as these cases were closed far too soon for hundreds of people; Rule looks at them now through the eyes of a relentless crime reporter. The second probe began in Utah when Susan Powell vanished in a 2009 blizzard. Her controlling husband, Josh, proved capable of a blind rage that was heartbreakingly fatal to his innocent small sons almost three years later in a tragedy that shocked America as the details unfolded. If anyone had detected the depth of depravity within Josh Powell, perhaps the family that loved and trusted him would have been saved. In these and seven other riveting cases, Ann Rule exposes the twisted truth behind the façades of Fatal Friends, Deadly Neighbors."

Reason for Reading: It's been years since I read this type of true crime.  I used to read it a lot.  I had been wanting to get back into reading something like this and who better to start with than Ann Rule.  I read a couple of her books waaaay back at the beginning of her career, but I had never read one of her crime file collections before.

The publisher's summary and information on the book itself is quite careful in not letting the reader know which cases are discussed in the book, except the Powell case, so I will not reveal that information either.  I really enjoyed this read and the format of 8 separate cases made it easy to pick up and read a chapter at a time once the two beginning 'novella' sized cases had been presented.  I enjoy Rule's writing, she has little sympathy for the offenders and yet on the rare occasion can show compassion *if* it is warranted. Rule does not go into gory details, but she does not gloss over the heinous acts either.  First and foremost her objective is to preserve the victim's dignity while letting the reader know the seriousness of the crime but not crossing over into that which would become voyeuristic.  I appreciated this style of writing and Rule's own concern and compassion for those she writes about is evident.

The book has a theme of murders/rapes committed by friends or neighbours though not every story sticks precisely to that theme.  It starts off with two 'novella' length cases then the next six are short story length.  The first case is the Susan Powell case, an extremely tragic story which started in 2009 and continued right up to the time of the author writing the book.  Next follows a strange tale where the police have closed the case on two deaths that occurred within 24 hours of each other in the same house.  The deaths were ruled as accidental and suicide but the public has taken the death of the six year old to heart not believing it to be an accident and the family of the other do not believe suicide is at all possible.  This is also a recent (2011) case which I found fascinating.  Personally, my thoughts lean towards the boy being an accident and the woman a murder.

The following six stories are mostly from the seventies, some solved, some cold cases.  I learned that back in the seventies they didn't use the term 'cold case' but referred to these cases as 'losers' at the time.  These cases involve murder, rape and missing persons and were all of interest.  I had not heard of any of the stories presented in this book, which was refreshing and Rule picked a great selection of stories to present together.  A quick, light read for the true crime fan.