339. Hereville: How Mirka Got Her Sword by Barry Deutsch 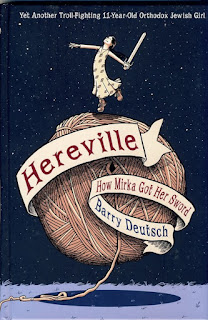 Publisher's Summary:  "Spunky, strong-willed eleven-year-old Mirka Herschberg isn’t interested in knitting lessons from her stepmother, or how-to-find-a-husband advice from her sister, or you-better-not warnings from her brother. There’s only one thing she does want: to fight dragons!
Granted, no dragons have been breathing fire around Hereville, the Orthodox Jewish community where Mirka lives, but that doesn’t stop the plucky girl from honing her skills. She fearlessly stands up to local bullies. She battles a very large, very menacing pig. And she boldly accepts a challenge from a mysterious witch, a challenge that could bring Mirka her heart’s desire: a dragon-slaying sword! All she has to do is find—and outwit—the giant troll who’s got it!
A delightful mix of fantasy, adventure, cultural traditions, and preteen commotion, Hereville will captivate middle-school readers with its exciting visuals and entertaining new heroine."

Reason for Reading: I read the second book in this series a few months ago and was so taken with it that I had to go back and read the first book right away.  Unfortunately, my library didn't have a copy and I had to wait quite a bit for a copy to come in through ILL.

I will start off by saying I read the Hereville books the wrong way round.  I read book 2 first, then book 1.  I really think had I read this one first I would have liked it better, but since I've read the second one which is highly entertaining, this just didn't live up to "How Mirka Met a Meteorite" where Deutsch really outshines himself.  However, this book is good and I'll try not to compare the two as one should read this first anyway.

Great story of an orthodox Jewish family, actually a whole town inhabited by only Orthodox Jews.  Not your typical fantasy book family!  This starts the book off on a fun note as we meet Mirka, her family, traditions, and footnotes translate the occasional Yiddish or unfamiliar terms.  Mirka is different from her siblings and friends as she is interested in monsters and wants to be a dragon-slayer.  It takes quite some time for the story to turn to the fantastical as a good portion of the book is spent getting to know Mirka and her way of life.  This is all very enjoyable though and very well written, especially the dialogue which flows very naturally.  The fantasy story is delightful and interestingly enough has a knitting theme (I am a knitter, so this tickled me.) Since I had already read the second book I found that both the witch and the troll lacked the humour they had in the other book, which was disappointing, but if I had just been introduced to them I would have found them amusing just so, I think.  A decent start to what proves to be an even better sequel!