336. Toothiana: Queen of the Tooth Fairy Armies by William Joyce 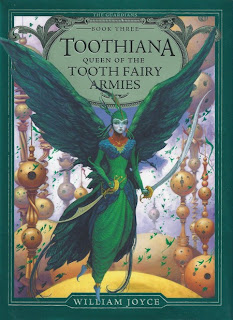 
First sentence: "William the Absolute Youngest galloped through the enchanted village of Santoff Claussen on the back of a large Warrior Egg, a gift from E. Aster Bunnymund."

Publisher's Summary:  "Beware a tooth fairy queen scorned in this, the third chapter book of Academy-Award winner William Joyce’s The Guardians series. There’s a lot more to this tooth-swiping sprite than meets the eye!

Now that the back story of Nicholas St. North has been told, and the mysteries of E. Aster Bunnymund have been revealed, we can permit you to meet one of the most riveting, mysterious Guardians of all time: the Tooth Fairy.

Do you want in on a few of her secrets? Well—she can spin herself into a multitude of selves, all depending on nightly teeth-placed-under-pillows rates. And her diminutive size is not at all indicative of how fierce a warrior she can be—Pitch, the Nightmare King, that nefarious villain and the Guardians’ nemesis, who loathes all things good, has no idea what he’s up against. And be forewarned: If you try to stay up to spy on her nocturnal pursuits, there’ll be Spell to pay.

We present to you Her Serene Royal Highness, Toothiana, Queen of the Tooth Fairies, The third Guardian."

Ds absolutely adores this series.  He has collected them all and given them the honour of residing on his bookshelf.  He really has no favourite character as he enjoys them all, even the evil Pitch.  Quite a few new characters are introduced in this volume, leaving some of the smaller regular characters without much page time, though I do seem to think everyone at least does get mention.  New to the series are the villain "The Monkey King", in league with Pitch of course, and his "Monkey Army, the titular character, and a surprise new character appears in the final chapters.  I just love Toothiana, a re-imagining of the tooth fairy.  She is a tall warrior, who has the ability to multiply into miniature versions of herself, and her appearance and mannerisms are birdlike.  An appealing, attractive character.  The plot marches forward with the overall arching theme of the series and yet this volume does have a somewhat separate plot of it's own, though rather esoterical, one of feeling a false relief and safety.  Finding Joyce's art stunning as ever and delighting in this series, which I am fond of comparing "The Spiderwick Chronicles" not in content but in target audience and quality fantasy plot and writing.

We are ready to see the movie now as we've read all the books "The Sandman" picture book review coming soon.  I'm very leery as to whether we'll like it though as the movie seems to differ drastically, from character names to dropping characters from the books and even adding unheard of new characters.  We'll see.......!