318. Going Up! Elisha Otis's Trip to the Top by Monica Kulling 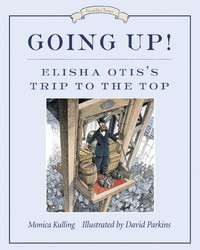 First sentence:  "It was haying time on the farm in Vermont."

Publisher's Summary: "A short, fully illustrated biography in the award-winning GREAT IDEA SERIES, about the man who invented the elevator - Elijah Otis. The man who enabled the hi-rise, and other feats of modern architecture."


Acquired:  Received a review copy from the publisher, Tundra Books.

I always enjoy good picture book biographies and Monica Kulling's "Great Idea Series" is a favourite of mine.  She has a knack for picking the not so common inventors of the last 150 years or so.  These are inventions we've heard of but the inventor's names are not always the most well known.  I have heard of Elijah Otis before but if asked who he was I would have answered "an inventor" not really connecting his name with his famous and life-changing invention, the elevator.  The book takes the usual form of this series which is comforting as each book is a welcome read when we know what to expect.  This one skips Elijah's childhood very fast as by page three he is married, widowed, father of two and remarried as he sets off to try his luck in New York.

We find Elijah a studious man, who though working in a factory by day, spends his evenings designing machinery to improve the speed of the manufacturing process.  Written with short paragraphs or two per page, each accompanied by large intricate illustrations that perfectly show off both Otis' character and the time period.  We eventually learn how he comes up with the idea of the elevator, the public's initial reluctance to believe it was safe and the eventual implementation of the elevator in architecture and its direct influence on the building of "skyscrapers". Another fine entry in the series.