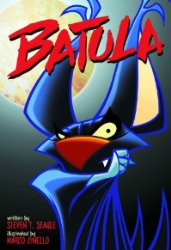 
First sentence: "This is The Orchard."

Livingston is a peaceful fruit bat whose life changes when he is bitten by a vampire and transformed into a vampire bat! As Batula - an avenging creature of the night - Livingston develops a taste for adventure and a need to prove that no matter what he looks like on the outside, he's still the same bat on the inside.


Acquired:  Received an egalley from the publisher through Netgalley

Reason for Reading: I love Ben 10 and this looked cute and fun.  The description I read failed to mention it was a "story book" so I was under the impression it would be a comic book.

I wouldn't have read this going in if I'd know it was a picture book, as I'd mistakenly thought it was going to be a comic.  Don't get me wrong, I like picture books but this just wouldn't have turned my crank.  Anyway, the artwork is obviously wonderful.  If you've seen Ben 10 then you know what to expect and that is what you get here.  Great visuals!  The story on the other hand, meh.  Livingston is a boring bat, nobody pays him any attention, until he comes back after being bit by a vampire bat.  Then he's all dark and mysterious and the girl he likes takes a shine to him, but he leaves when he starts thirsting for blood and meets a werewolf spider who convinces him to go superhero.  So guess who he goes after?  Yeah, the vampire who bit him and just in time because he's attacking Livingstone's bat village.  He saves the day, gets the girl, the end.  Really cliched, not very original.  Very young ones might stay tuned for the pictures but most will find it dull.