281. Scott Pilgrim Gets It Together by Bryan Lee O'Malley 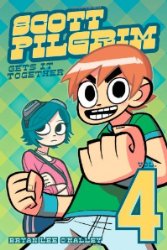 Scott Pilgrim Gets It Together by Bryan Lee O'Malley. (Canada) - (US)
Scott Pilgrim, Vol. 4

Publisher's Summary:  "A couple months have passed since we last caught up with Scott, but what could change in a few months? Well, not much has. He's still living with Wallace and playing in a band. Most importantly, he's still dating the lovely Ramona and dealing with the gaggle of superpowered, superstylish, superevil ex-boyfriends determined to take him down. But something *is* different. Don't look now, but Scott might actually be getting it together, just in time to confront Ramona's most intimidating ex yet!"


Acquired: Borrowed a copy from my local library.

This was much better than volume three!  The story has picked up and the humour is once again fresh.  This had me giggling in quite a few places.  Also just when I had given up hope in the last volume, Scott actually hits a crossroads in his life where he has to take on some responsibility and his character is strengthened for it .  He's still pretty clueless and lazy, but *not quite so much* of a jerk.  I may possibly like him by the end of the series if this continues.  I like Ramona but this volume she became a bit annoying as her usually mature early 20s behaviour slid a notch into more high school-like jealousies.  A few new characters were introduced, some may be permanent while others were obviously just for this volume.  I'd like to reiterate that the publisher recommends this book (and series) for ages 13+ but I am emphatically recommending it for 18+.  It is shelved in the adult section of my local library with good reason.  The story is about college age youths , 20-26, with one 17yo who is dragged into a lifestyle she is not old enough to be living.  The books contain a fare share of language and a lot of s*xual innuendo and s*x talk, plus implied s*xual relations.  This book in particular deals specifically with lesbian and gay s*x.  While this is a topic I would have preferred to do without I am pleased that the story is shaping up to be more than just Scott vs evil boyfriend.  Of course, he does fight the requisite boyfriend but there are more layers behind the characters now.  I am enjoying the major characters at this time in the series and while I'm not always thrilled with the content, I am vested in finishing the series.