255: Hereville 2: How Mirka Met a Meteorite by Barry Deutsch 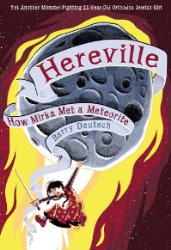 How Mirka Met a Meteorite by Barry Deutsch (US) - (Canada)
Hereville, 2


First sentence: "Being grounded left Mirka with too much time and pent-up energy "

Mirka is back, and she’s still the only sword-brandishing, monster-fighting Orthodox Jewish girl in town. Or so she thinks.

When a misguided troll aims a meteor at the witch’s house, the witch grabs hold of the closest thing possible to transform the flying, flaming rock—and that would be Mirka’s hair. The meteor is changed, all right: it’s now Mirka’s identical twin.

Doppelganger Mirka, vowing to be a better version of the real girl, sets out to charm all of Hereville, including Mirka’s own family. Our heroine challenges the meteor girl to a three-part contest . . . and the loser will be banished from Hereville forever!"


Acquired: Received an egalley from the publisher through Netgalley.

Reason for Reading:  I haven't read the first book in this series (soon to be rectified!) but this sounded so charming I had to go ahead and read it anyway.

The portrayal of an Orthodox Jewish family is a breath of fresh air in the book.  It is lovely to have God spoken of simply and with reverence in a mainstream book.  I enjoyed all the Jewish references to words, customs and culture which made this a unique book in the fantasy genre.  A delightful story that had me glued to the pages in one sitting.  I fell in love with Mirka and her family and thought this was a special story.  Not having read the first book, I know I missed all the references to it in the story but it didn't matter to my enjoyment of this one as a standalone.  I can't wait to read the first now though.  A really, unique and entertaining main character plus some of the best, realistic dialogue I've ever read make this a fantastic book.

I only have one quibble and that is about the author's use of knitting in the story line.  He has made a big mistake in using berets for someone who "lacked patience or skill".  Berets are actually not something a beginner would knit.  They are knit in the round and require a lot of decreasing over a large amount of stitches, requiring concentration.  They would be knit on 4 needles or a circular needle, switching to 4 needles once nearing the end.  The illustrations clearly show Mirka knitting round berets on two straight needles!  This is a blunder that any half-accomplished knitter will pick up on right away on page 1!  Why didn't the author ask a knitter about this?  In this situation, a beginner knitter almost always knits scarfs or shawls.  This has brought my rating down to a 4 for an otherwise outstanding book.