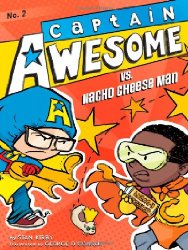 But when Eugene and Charlie get into a fight, Captain Awesome is forced to wonder if Nacho Cheese Man might actually be…bad? In the process of sorting out good guys and bad guys, Eugene learns an important lesson about friendship—and what it really means to be a superhero."

Acquired:  Received a review copy from Simon & Schuster Canada.
.
Reason for Reading: Ds read aloud as his reader. Next in the series.

Really pleased with this chapter book series for beginning readers.  Nice big words, double spaced, pictures on every two-page spread all to make the book visually appealing to the young/reluctant reader.  These are all important aspects but of course there must be a good story as well and Captain Awesome passes the test second time around bringing a good, clean fun book that will appeal mostly to boys.  There is excitement and silliness and the chapters are just the right length with some variation.  Of course George O'Connor's artwork is wonderfully pleasing and adds to the sense of fun these two boys are having.  What I especially like is that even though this book is particularly aimed at 5-7 year olds, the book only mentions the children are in Grade Two once.  Otherwise, there is no age set upon these characters except that they are kids and my struggling 12yo reader felt the book was appropriate at all times.  The story dealt with being annoyed with younger siblings and being quick to blame a friend without any proof.  Plus dealing with a neighbour's dog.  He enjoys this series and though it is just a tad hard for him,  he is doing well with it and we will continue to look forward to Captain Awesome's further adventures.
Labels: 2012 children's books early chapter books humour superheroes