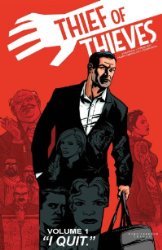 Publisher's Summary: "Conrad Paulson lives a secret double life as master thief Redmond. There is nothing he can't steal, nothing he can't have... except for the life he left behind. Now with a grown son he hardly knows, and an ex-wife he never stopped loving, Conrad must try to piece together what's left of his life, before the FBI finally catch up to him... but it appears they are the least of his worries.

Acquired: Received an egalley from the publisher through NetGalley.

Reason for Reading:  I'm always on the lookout for straight mystery/crime/thriller graphic novels. It's an area I would like to see expanded with quality work.

This gave me a bit of a vibe of that movie with Sean Connery where he is the professional cat burglar and he trains the young woman to be as good as he is.  Forget the name of it but it was a remake of an older movie starring George Hamilton, I believe.  Anyway, back on topic.... This novel did give me some good vibes.  I liked the big group of pro criminals working on a job aka Oceans 11; I liked the action and the heists.  There was certainly a James Bond feel to the Redmond character, though Redmond is a broken man now, we visualize he may have been the debonair, suave Bond type in his youth.  So, on the whole I did enjoy the romp of this read.  However, it did have quite a few pitfalls.  The dialogue was unrealistic, people don't talk like this, even thieves.  The heists were over the top and not believable outside of the realm of Hollywood.  The whole premise really didn't feel likely; Redmond wanted out so badly and yet he backed himself into a corner he couldn't get out of.  Not exactly smart for our supposed hero.  Rather unrealistic, but nevertheless a pleasant diversion.  I'm in no hurry to read the next volume, though I will look for it in the library when the time comes.
Labels: 2012 crime graphic novel thriller