264. Such Wicked Intent by Kenneth Oppel 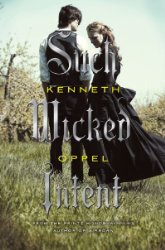 Such Wicked Intent by Kenneth Oppel  (US) - (Canada)
The Apprenticeship of Victor Frankenstein, Book 2

Publisher's Summary: "Tragedy has forced sixteen-year-old Victor Frankenstein to swear off alchemy forever. He burns the Dark Library and vows he will never dabble in the dark sciences again—just as he vows he will no longer covet Elizabeth, his brother’s betrothed.

If only these things were not so tempting.

When he and Elizabeth discover a portal into the spirit world, they cannot resist. Together with Victor’s twin, Konrad, and their friend Henry, they venture into a place of infinite possibilities where power and passion reign. But as they search for the knowledge to raise the dead, they unknowingly unlock a darkness from which they may never return."

Reason for Reading:  This is the author's latest book.

Absolutely stunning.  The first book was good and this one is twice as good.  Oppel has stepped up the gothic atmosphere, introduced the supernatural element, played the romance element and kept the entire story very dark.  There is not one character in this book who is not immune to the elements of the darkside.  The reader doesn't really know if anyone is truly a 'good' character.  I found this to be one of the best books I've read by Oppell and I've read his entire oeuvre except his early novels.  Very dark, Oppel has managed to keep the same religious undertones that are found in the original Shelly's Frankenstein.  Keeping the character of Elizabeth a Christian, Victor's actions are questioned over and over again as to whether he is playing God, does he have a god complex and while Oppel delves into the supernatural, unlike Shelly, I realistically get a good feel that this could indeed be the set up that turns the boy into the man who eventually creates the creature known most commonly by his own name.  This was a page-turner for me and I'm quite impressed with the variety of styles Oppel is capable of writing to such perfection.  This is his forte though,when he turns to the atmospheric, dark and moody he is in his element.  A must read for fans of gothic literature.
Labels: 2012 Canadian author gothic paranormal YA