261. Flash and Bones by Kathy Reichs 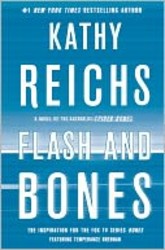 
First sentence: "Looking back, I think of it as race week in the rain."

Publisher's Summary: "Just as 200,000 fans are pouring into town for Race Week, a body is found in a barrel of asphalt next to the Charlotte Motor Speedway. The next day, a NASCAR crew member comes to Temperance Brennan’s office at the Mecklenburg County Medical Examiner to share a devastating story. Twelve years earlier, Wayne Gamble’s sister, Cindi, then a high school senior and aspiring racer, disappeared along with her boyfriend, Cale Lovette. Lovette kept company with a group of right-wing extremists known as the Patriot Posse. Could the body be Cindi’s? Or Cale’s?

At the time of their disappearance, the FBI joined the investigation, only to terminate it weeks later. Was there a cover-up? As Tempe juggles multiple theories, the discovery of a strange, deadly substance in the barrel alongside the body throws everything into question. Then an employee of the Centers for Disease Control and Prevention goes missing during Race Week. Tempe can’t overlook the coincidence. Was this man using his lab chemicals for murder? Or is the explanation even more sinister? What other secrets lurk behind the festive veneer of Race Week? "

Reason for Reading:  I read all the author's books.  I've got myself slightly behind but will get caught up shortly.

First I'll start by saying I enjoyed the book very much.  It was actually quite refreshing.  Reichs seems to have removed herself from the cookie cutter mold she had let herself slip into lately, not that I don't always enjoy her books to a 3 or more but they do follow a pattern.  Here we have Tempe entering a new world, one she isn't familiar with, that of Nascar Racing and she has to deal with some bones found in fairly obscure condition.  As often happens a past and present corpse bring ideas of a relationship to their deaths and the investigation gets underway both into the current deaths and into the John Doe case.  I kind of kicked myself when the perpetrator was found as it should have been easy to solve but it didn't come to me this time.  I enjoyed Reichs usual details and it ended up being a surprising and sad case.

On the other side, Tempe's continual personal life is always an ongoing theme of this series and I was pleased with its direction.  It was not what I had expected as Andrew Ryan does not appear in the book at all.  We do hear of him, through email letters and Tempe does still care about him, Charlie Hunt(?) her other suitor has been busy on an all important case and may perhaps be finding interest somewhere else.  Meanwhile Tempe meets an ex-cop whom she works with on this case who makes her heart go pitter-patter in a completely different, new and exciting way.  On top of that her ex and his fiance, 24 -year-old Summer, are driving her insane.

A good all around mystery with a new fascinating setting, but for some reason I felt this a very slow read.  It was not hard to put down  and it would take time for me to pick up again.  Personally I think this was me,not the book's fault.  It was just a slow reading week for me.
Labels: 2011 crime mystery