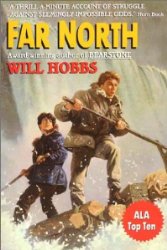 First sentence: "The first I ever heard of the Nahanni River and Deadmen Valley was from the bush pilot who met my flight at Fort Nelson, way up at the top of British Columbia."

Publisher's Summary: "Mayday! Landed on river. Engine out.
Floating toward the falls."

When the engine of their float plane fails during a water landing near the head of Canada's monumental Virginia Falls, what began as a sightseeing detour turns into a survival mission for two high-school students and their elderly companion.

With the brutal sub arctic winter about to fall like a hammer, Gabe Rogers, his boarding-school roommate, Raymond Providence, and Raymond's great-uncle, Johnny Raven, are trapped in a deadly wilderness. Braving icy rapids and desperately hunting for moose in their struggle to fend off starvation, all three travelers must rely on the others' knowledge and courage, or survival is out of the question."

Reason for Reading:  Several reasons:  I read this aloud to my son.  He really enjoyed our previous two Will Hobb's read alouds Jason's Gold and it's sequel Down the Yukon.  He asked that I read him more by the author.  I searched out titles and specifically choose this one for two reasons: 1) ds is very fond of both survival stories and any story that takes place at sea/on water (in this case an arctic river); 2) I have a geographical reading project going and as far as Canada goes I only have two provinces left and this would count as my North West Territories book.

We sat down to read this book expecting an exciting book and Will Hobbs once again delivers.  We were both thoroughly glued to our seats during the reading of this book.  Hobbs always takes time to introduce his characters and set his story properly before diving into the adventure so don't expect to hit the ground running.  This is not how Hobbs writes.  He is a wonderful writer, with a skilled pen at description of scenery and really giving one a sense of being exactly where he has planted his characters, in this case a very northern part of Canada in the North West Territories, close to the Yukon border, along the Nahanni River boarded by cliffs on both sides.  Once the adventure starts, though, the excitement is non-stop and peril is around every corner.  Hobbs deals with man vs nature in a realistic manner and man doesn't always win, he gets hurt and sometimes he dies.  Chapters end in either cliffhangers or desperate measures making one sorry to leave off until next time.   As I said we both really enjoyed this, I'd say I liked this best of the three we've read so far.

This book also qualifies for the Canadian Reading Challenge since it takes place entirely in Canada, although the author is American, not a Canadian.
Labels: 1996 Canadian non Author realistic fiction YA