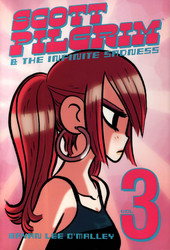 
First sentence: "Oh man yeah!  You have to see them live."

Publisher's Summary:  "Ramona's 3rd evil ex-boyfriend, Todd Ingram, is currently dating the former love of Scott Pilgrim's life! Envy Adams broke Scott's heart a year and a half ago. Now she and her evil art-rock band are back, and they're getting Scott's band to open a show two days from now! That's just enough time for Scott to fight Todd, keep Ramona happy, fend off demented ex-girlfriends, and practice that new setlist. Right??"

Not a lot happens in this volume and I can't say I was all that entertained this time around.  A lot of the book is spent with Scott's friends hanging out with Envy's band and all the uncomfortable angst that brings about since Scott used to date Envy, Scott is now dating Ramona, Envy is talking trash to Ramona, Knives would like to kill Envy, Envy is dating Todd.  Todd used to date Ramona.  And Neil would like his date with Knives to work out tonight.  During this time as they all talk and sort of prepare for the gig that evening we are given flashbacks to Scott and Envy's highschool romance; it wasn't much.  She dumped him.

Then suddenly out of nowhere Scott goes nuts and decides it's time to fight evil boyfriend #3, Todd.  Right there and then only problem is he loses since Todd is vegan and has special vegan powers.  Well this leads to other stuff and the book finally ends with Scott (not so) looking forward to evil boyfriend #4.

I couldn't get into the book this time.  Ramona, who I like best, just didn't do much.  Scott is certainly not on any sort of track to improve himself at this stage and I think that would be wishful thinking on my part, by this point.  The fight scenes were really very dumb so I didn't even enjoy the video game aspect of it this time around.  I'm not trashing the book though.  It did keep the plot going, kept all the characters involved, had a few good one-liners and at the back of the book Bryan Lee O'Malley includes a small list of his favourite manga at the time.  I'd read one series already (Death Note, and loved it) so I looked up the others and found one to add to my "want to read" list Berserk by Kentaro Miura.
Labels: 2006 Canadian author fantasy magical realism manga