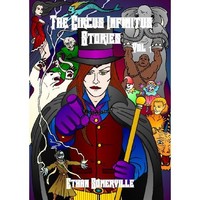 
First sentence: "Ladies and Gentlemen, welcome to the Circus Infinitus!"

“Madam Zazuma” – penniless aristocrat Elizabeth Montrose turns to the Circus Infinitus for help to escape from a loveless arranged marriage.

“The Monocle and the Morality Police” – Queen Victoria decides the Circus Infinitus is a corrupting influence on the people of London and charges Sir Hubert Fotherington and the IntelliGent with the task of shutting it down.

“The Haunted Funhouse” – Take a tour through one of the Circus’s attractions.

“Maxiumum Terror” – inside the Maze of Mirrors, don’t look too deeply or you might see the darkness inside your own soul.

“A Week in the Life of Victoria-7” – Introducing the Lady with the Seven Faces.

“Goril-Ho-Tep” – Amuna the Mummy leads an expedition into the British Museum to steal a mummified ape.

“A Week in the Life of Violet” – Victoria-7 tries out the Immortality Machine in an attempt to break her curse, and makes herself human once more.

“Gremlins” – After arriving in the United States for the first time, the Ringmaster must seek help from the Zero Corps to save the Circus from an infestation of insectoid monsters from the Immaterium."

Acquired:  Purchased this when it was being offered for free.

Reason for Reading:  For some reason I love weird circus stories, so this just appealed to me.

An entirely entertaining introduction to the world of the "Circus Infinitus".  According to the publication date, this is actually the 6th book in the series but it read well for me as a starting point.  There are times when one wonders if one would have a slight bit more fun if they'd more background knowledge but overall, most of the stories are background introduction stories themselves to the particular characters who inhabit this world.  I'd certainly classify this as steampunk as it takes place in Victorian England, for the most part, and includes steamworks, clockworks, and odd mechanical gadgets.  There are nine books in this series which have been published since 2010 to the current year, so far, and I must say I was a bit unsure going in what I was in store for as there are no reviews of any of the books at this point.  But I feel like I've stumbled upon a little secret gem as I enjoyed this enormously.  The book, however, is in need of editing.  There are typos, misspellings and grammar errors; enough to be quite noticeable.  I wasn't at the point of frustration but some people may not tolerate it.  However, at .99 purchase price, the writing outweighs the editing at this point.  I did enjoy the book enough that I took the plunge and purchased the first published novel in the series, for .99, to give it a go and see how a full-length novel measures up.  I'm quite tickled at this point to have discovered this series.

1. Welcome to the Circus Infinitus! - This first story introduces us to this strange circus of freak shows and unusual acts, we become aware that there is something magical, perhaps paranormal about the circus; at least it doesn't run by the boundaries of this earth.  We watch a show in progress and are introduced to many of the acts in the circus as they perform.  There is a strange hissing sound as curtains close, then open and a new stage is immediately set for the next stage.  There is a man who works with electricity and is mysteriously all bandaged up and "steampunk" thinks the reader.  In the audience is a serious man who does nothing but scribble away in his little notebook muttering to himself about the Queen's displeasure.  Queen?  Victoria?  Oh, yes, steampunk happening thinks the reader again.  After a double break line letting us know something new is about to happen a freak with a deformed body named John (yes, I am thinking his last name at this point) is put on stage growling and acting as he is introduced as the Elephant Man.  Then John Merrick collapses, the show is called to a halt and a doctor is sent for.  This doctor is one of the circus' own and is actually an alchemist nicknamed Jack who has just got himself a new talisman, so his powers are at high form.  Jack the Ripper comes back, under duress I might add, and helps cure John Merrick.  So ends our introduction to the Circus Infinitus.  I just loved this story!  What a load of fun!!  The back story of just who Jack the Ripper really is, is very imaginative and great fun.  A great beginning to what could prove a fascinating book if it continues in this vein.  5/5

2. Madam Zazuma - A young couple, Edward and Elizabeth, go to the Circus one evening.  As the night goes on we find out they are engaged, it is an arranged marriage that Elizabeth is obliged to, and that Edward is somewhat of a brute.  Elizabeth convinces Edward to visit the fortune teller Madame Zazuma.  Edward is insulted by his fortune and storms out but Elizabeth stands her ground saying she wants her fortune told.  She is warned off Edward and told that things will come to rights in the end.  Elizabeth finally finds out that Edward has been soliciting the company of Adella the Amazon and this is where things get very strange and Elizabeth's life is changed forever, for the good we hope, but we will have to see if she turns up again in future stories.  A couple of characters from story 1 appeared in this one.  Again another fine story.  Individual but lightly connected to the first.  5/5

3. I Want to Join the Circus - A young boy sneaks off to join the Circus Infinitus.  As he sneaks around at night he becomes aware of the unsavoury goings on at this circus and witnesses much horror.  While Tumblety and Abacus have no sympathy for the lad, we get to know the Ringmaster better as he takes care of the situation and saves the boy, while explaining why there are no children workers at his circus.  Not a major story in the canon but explains some more about this odd circus and the goings on.  The Ringmaster may not exactly be an admirable fellow but he does seem to have his own code that he adheres to.  4/5

4.  The Monocle and the Morality Police - We met the Monocle back in the first story.  Here he has a meeting with Queen Victoria and a Hindu contemporary.  She wants the Circus gone, whatever it takes.  This is the longest story by far up to this point and very creepy and weird.  It involves X the strongman who is not human anymore as he has several symbiosis living inside him.  The symbiosis can leave at will and lead separate lives but X is helpless without them.  I won't give any more details but lets just say very strange!  Unfortunately, The Monocle and IntelliGent kidnap X to torture and extract secret information about the Circus. Obviously they've picked the wrong guy and things do not work out as planned.  4/5

5. The Haunted Funhouse - We are taken along with the customers on a tour of the haunted house, knowing the house is inhabited by real paranormal creatures and human oddities.  The people start off cock-sure that they will meet people in sheets and fake masks only to be amazed by the oddities they see.  The tour becomes scarier and scarier until midway through people are screaming and rushing from rooms, until the end where things calm down a bit and many have the bravado to say they would go through again right away.  Once the tour is over, we meet the "performers" gathered as they talk of the tour's profits.  This one is very short and has good atmosphere, though doesn't include any major characters.  3/5

6. Maximum Terror - This story doesn't really add to the cannon or even introduce any new characters.  It is very similar to the last one.  This time we move next door to the Mirror Maze attraction.  Like normal funhouse mirrors these are set to alter the person's appearance but rather than humorous they change the person into odd, rather disturbing images designed to give a little shock to the system.  Well this time people come screaming out of the maze saying they saw horrible things such as maggots, rotting corpses, exploding intestines turning into snakes, etc.  Professor Abbacus is called to the scene and we are taken inside the clockwork machinery to see the slight adjustment that has to be made to set things aright.  2/5

7.  A Week in the Life of Victoria - Nothing happens in this story, we are just introduced to Victoria 7, who on each dawn of the new day transforms into a new being.  The cycle resets every seven days.  We've already met one of her personages in a previous story and now we are introduced to her properly along with the other six.  Victoria is musing upon herself and describes each individual in looks, desires, appetites, feelings, powers and how she compares them against each other.  Not  a very exciting read but will serve a purpose if she shows up again in another story. 2/5

8. Goril-Ho-Tep - Now we are thankful for the above story as this one features Amuna the Mummy, one of Victoria 7's personages.  It also features a certain un-named Detective who resides on Baker Street.  The mummy of a gorilla is on display at the British Museum and business is not so brisk at the Circus.  Out of curiosity Amuna goes to see the display and is immediately drawn to the Gorilla. She wants him brought back to life and while we've heard of it many times before in previous stories, we finally get to see the steamwork "Immortality Machine" at work.  By this point Professor Abbacus has become a well-known character, and The Ringmaster to a lesser degree.  An entertaining story.  3/5

9.  Fool's Errand - A very long story which has two cousins drawn to the Circus by an object nobody has ever found of any use before; one has a legitimate reason for coming, the other has been sent by the Bishop who, with the Monocle and Queen is working to bring the Circus down once and for all.  An entertaining story with lots of action and we meet Victoria as Lady Frankenstein in this story.  A secret is revealed about Abbacus and the Circus does its disappearing trick and ends up in Yorkshire this time.  4/5

10. A Week in the Life of Violet - While the stories are still episodic, at this point the book has taken on the resemblance of a continuing story.  Vampiress decides she wants to remain in this form and convinces Abbacus to use the Immortality Machine on her thinking it will stop her daily transformations.  Instead she becomes the visible Invisible Woman, a human girl, the real girl she was before she was cursed, Violet.  Violet has the time of her life and wants to be human forever, she finds love and hopes for the best.  Things don't work out for the best for her and the story ends with a mysterious cliffhanger leaving us wondering about The Ringmaster.  Another long story.  I really enjoyed this one.  It also mentions Reggie Jefferson from story 9 and Elizabeth from story 2, so we know they are still with the Circus and what their jobs are.  5/5

11.  Gremlins - The Circus is in the States and President Cleveland has received a letter from Queen Victoria so he sends his team of three supernatural investigators out to essentially get rid of them but, instead, they become great friends and end up helping the Circus fight off an infestation of the new Industrial Age cryptid, Gremlins, who feed off mechanical parts.  This was another long story and very enjoyable.  I really liked the three new American characters and found this a great story with which to end the book.  5/5