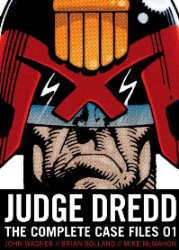 Publisher's Summary:  "Since 1977, one man has dominated the British comic scene. He is judge, jury and executioner; a merciless farfuture lawman delivering justice with an iron fist on the mean streets of Mega-City One. He is Judge Dredd! US readers can discover the roots of this legendary character in this vast a thrill-packed series of graphic novels, which collect together all of Dredd’s adventures in chronological order."

Acquired: Purchased a new copy from an online retailer.

Reason for Reading: I've read quite a few Judge Dredd collections now including book 5 of these Case Files and knew it was time to start at the beginning.

This is where it all started!  The very first Judge Dredd stories collected together in chronological order are a delight for any fan to read.  I had such a fun time reading this book.  The book starts off with single episode stories but it doesn't take long until the Robot Wars issues start and we have a long running sequential story.  After this the stories vary from one short episode to several long running issues.  Midway through the book Dredd is sent to Lunar-1, the moon, as the new Marshall, and the rest of the book takes place there which was a little disappointing as such little time was spent in MegaCity 1 for this book.  However just at the very end he returns home to earth.  I had not ever read any stories that took place on the moon so this was all interesting for me and I have to say I enjoyed everything in this collection along with all the cheesiness involved in the early days of Dredd.

First, I had not realized Dredd started in the late '70s, I had thought it was early '80s, and this makes a difference in how the comic was presented.  My first shock right on page one was being presented with a skinny Dredd!  This skinny '70s Dredd is surrounded by other skinny people with Afros and Charlie's Angels' haircuts.  It takes the whole book for Dredd to develop into a muscular Terminator-type though not quite up to his '80s self yet.  Also MegaCity 1 is in the US and Judge Dredd though a British comic is very American in presentation, however as we start to read the first couple of comics I was hit by the "Britishisms".  Right away way the word "lorry", then came "petrol", "lift", etc. this continues for quite some time and starts to disappear midway through the book, though even at the end the word "lift" was used.  In the collections I've read so far I haven't gone back this early, and have paid particular note to how "American" the MegaCity culture is so this was surprising.  Another difference was the lack of Block names, instead of the amusing famous people names for the city Blocks MegaCity is just divided into numerical Sectors, Sector 64, etc.  It will be interesting to see when the Block names are incorporated.  Finally, a major difference in the early Dredd is his personality.  Dredd, of course, always gets his man and is on the side of justice no matter what, but this early Dredd is a bit of a goody two-shoes compared to the mid-80s onwards Dredd.  Every crook is captured and goes to prison.  Dredd drives around handing out fines to citizens for jaywalking and driving too slowly.  He main concern in life is following the law to the letter.  He's really a bit of a jerk when it comes down to it, not the complex character he is now, and I wouldn't love him if this was my first exposure to him.  But it's not and I do.

I could go on about "this" Dredd and the later Dredd but when all is said and done this was a load of fun for a fan.  I would not recommend a newcomer start here; you probably wouldn't "get" what the big deal is, a lot has changed.  But these stories are fun, yes some are cheesy, but some are very good.  I loved seeing how Walter was introduced, the first glimpse of Judge Rico, the whole Robot Wars episode, the "red shirt" syndrome of any other Judge who went out on a call with Dredd, the introduction of Judge Giant and the introduction of Sov-City.  Looking forward to volume 2 which promises to bring the epic "Cursed Earth"!
Labels: 1977 1978 2012 crime graphic novel post-apocalypse science fiction YA