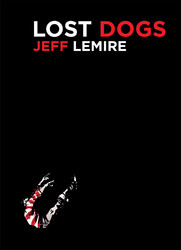 Publisher's Summary: "Long out of print, Jeff Lemire's Xeric-Award-winning LOST DOGS now returns in a newly remastered edition, soaked with blood and ink. This 104-page mythic yarn follows a family man who's larger than life... but even he may not be powerful enough to prevent the loss of everything he's ever known.

Reason for Reading: I had not yet read anything by Canadian artist Jeff Lemire and have wanted to for ages. This being his first book, and knowing it was a dark story prompted me to finally give him a go.

For a first time reader of Lemire I was fascinated with this short novel.  An incredibly dark story with a redemptive ending; the type of book I always find deeply satisfying.  This is Lemire's first book and it shows.  I was struck rather harshly for the first few pages at how raw the drawing was and how ugly the people were drawn, but I quickly grew accustomed to it and I do have to say that I am always attracted to this type of art done in inks.  The story gripped me; it is set in the past, during the days of horse & buggies.  The publisher's summary assumes Lemire is so popular we don't need a story summary but I do and did search around for one before I read it.  A giant of a man takes his wife and daughter to the city for the day and they wander into the wrong part as evening approaches to watch the ships.  They are attacked and his wife and daughter are killed.  The man eventually learns his wife is still alive and must make a deal with a man to use his size in return for the information on where his wife is being held.  The story just becomes darker and darker as it progresses until the very end, which though bittersweet, was redemptive and satisfying.

Some would call this a "depressing" story, but my regular review readers will know I like depressing and very much enjoyed this story.  If this is Lemire at his worst (his fans seem to regard this as just ok) then I am truly interested in exploring his other works.  Since I've started at the beginning, perhaps I'll read him in chronological order.