In honour of Thrill Week, I've been posting a mystery/thriller/crime review every other day this week so my review #'s have be en very out of order for the duration. Back to regularly scheduled posting (mostly) tomorrow. 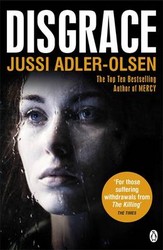 Disgrace by Jussi Adler-Olsen. Translated from the Danish by Kyle Semmel.  (US) - (Canada) - (Kindle)
aka: The Absent One (US title)
Department Q series, book 2

First sentence: "Another shot echoed over the treetops."

Publisher's Summary: "Kimmie's home is on the streets of Copenhagen. To live she must steal. She has learned to avoid the police and never to stay in one place for long. But now others are trying to find her. And they won't rest until she has stopped moving - for good.

Detective Carl Mørck of Department Q, the cold cases division, has received a file concerning the brutal murder of a brother and sister twenty years earlier. A group of boarding school students were the suspects at the time - until one of their number confessed and was convicted. So why is the file of a closed case on Carl's desk? Who put it there? Who believes the case is not solved?

A police detective wants to talk to Kimmie and someone else is asking questions about her. They know she carries secrets certain powerful people want to stay buried deep. But Kimmie has one of her own. It's the biggest secret of them all.

Simply superb psychological thriller.  Adler-Olsen does it again.  Detective Carl Morck is pulled into a case 20 years old and then related cases seem to pop up all over the place.  As if that isn't enough, murders are happening now that just may well have a connection with these cold cases as well and the names involved are only just the creme de la creme of Norway's high society.  Carl and his sidekick Assad are back together again with their trepiditious friendship more firmly grounded as they have learnt to trust one another and as they stand together facing the unknown element of a new partner to their Department, the cold, mouthy, yet efficient Rose Knudsen.  I absolutely loved the case; very unique, very creepy, never quite sure where the author was going to go with it.  One thing I often wondered about was the scene that takes place in the "Prologue", who is the person that this is happening to? I found myself going back and reading it a couple of times because I thought I'd figured it out but could find no clues to back myself up and pow! what a zinger, when we do find out who it is.

I'm a big fan of Carl; he's crusty, used to the old ways, doesn't like change and isn't really about to change in anyway he can get away with it.  He and Assad are polar opposites but they've worked out quite a nice relationship, where they can drive each other batty at times and at others work on perfect sync.  I'm not impressed with the new addition of Rose but I don't think I'm supposed to be.  I've been exposed to Carl's opinion of her and her attitudes toward him and I'm not liking it.  Three's a crowd , I say.  But someone else may say, they need a female voice in here.  She's a pain in the butt and I'm not prepared to like her, but we'll see what happens in the next book.  However, I'm not docking any points because I don't like a character!  Great, great thriller.  Love Adler-Olsen's writing, the intensity, the shock value without going too far, but going far enough to give us that just beyond sick, sicko psycho killer.  Bring on the next book!

PS: I love the UK covers and titles for this series!  Even though neither the US nor UK titles reflect the original intent of the Danish titles.  This one's Danish title literally translated is "The Pheasant Hunters", which is a phrase used in the book to denote a certain class of people and is a perfectly suitable title.  Perhaps the phrase is not known to western readers but funnily enough I ran across the phrase in an English book I read shortly after this one.
Labels: 2012 crime mystery thriller