232. The Lives of Sacco & Vanzetti by Rick Geary 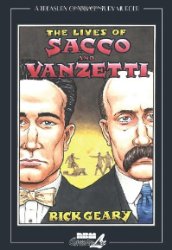 First sentence: "During the morning hours, as people go to their jobs, many of them note the presence of two strange men "hanging about" the town."

Publisher's Summary:  "Rick Geary tackles the most controversial case of the 20th century. Anarchists Sacco & Vanzetti were accused of robbery and murder but so many supposedly damning pieces of evidence were questionable their guilty verdict elicited massive protests around the world. Geary presents us with all the twists and turns, appeals and dubious evidence after presenting us the human face of the two men, demonized by many, turned to martyrs by many others in his usual unflappable way."

I have to admit I wasn't looking forward to this one *that* much as I prefer the ones about the bloody serial killers like "Beast of Chicago".  I had never heard of this case and the robbery/murder, socialist/anarchist angle didn't get me that excited.  Surprisingly though once I started reading I was quite taken with this case, especially the proceedings of the trial and the way the reader is left ruminating whether they were in fact guilty or innocent.  It's amazing that with how this became such a worldwide controversy, with many country leaders of the 1920's and famous personages speaking out on the case that it has become so obscure today. One would think their names, at least, would have been remembered.  I can only say what a pleasure it was to read Geary again, nobody (and I mean *no* body) does b/w graphic novels like Rick Geary.  His artwork and presentation of these true crimes is pure joy to hold in your hands.  I like the order Geary presented the story, first with the crime being committed, then going back and telling the life stories of the two individual accused and finally ending with the trial.  It is quite shocking to today's standard's to see how prejudiced a 1920s courtroom could be.  We have a sense today of people being racist against others because of their religion and mostly because of the colour of their skin but it is hard to comprehend the radical racism portrayed here against the Italians simply because of the country they came from.  And to see these people discredited for that in the courtroom!  Geary leaves us with the list for and against their innocence, the belief many professionals have today that at least Sacco was probably guilty and leaves us to ponder the question on our own.  An intriguing case I would never have found myself reading about if it weren't for this book!
Labels: 2012 biography crime graphic novel true crime