228. Jake and the Big Hairy Lie by Phil Callaway 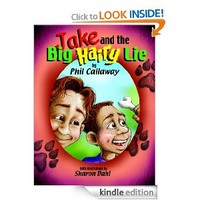 Jake and the Big Hairy Lie by Phil Callaway. Illustrated by Sharon Dahl -  (Kindle)
The Adventures of Jake, #1

First sentence: "If you ever hear of a smarter kid than my older brother Jake, I'd like to know about it."

Publisher's Summary: "Jake is a very smart kid, and his little brother knows it. Sometimes being smart get you into trouble because you think of things you shouldn't. Things that leave you feeling like a lobster in a pot of boiling water. When their dog comes home with Mrs. Wilson's dead rabbit in its mouth, the boys know they need a foolproof plan to deal with the situation. But they don't know where their lie will take them and that the way out may be easier than they thought."

Reason for Reading: My son read aloud to me as his reader.

I was pleasantly surprised to see that this somewhat obscure out-of-print series by Albertan author Callaway has been made available on Kindle at reasonable prices.  This is a nice first chapter book, with big easy to read text and illustrations.  What starts off as a silly story turns into a lesson about lying for the brothers that never becomes preachy about it.  The book starts off hilariously when a big black dog with rude manners shows up and everyone mistakenly thinks the dog belongs to the other.  Once no owner is claimed the boys get to keep the dog and a series of mistaken incidents take place leading to a lie, a cover-up and an "egg on your face" realization.  A silly story, well-written and fun for any age of early, reluctant or struggling reader. We've purchased the other's  in Kindle format already!