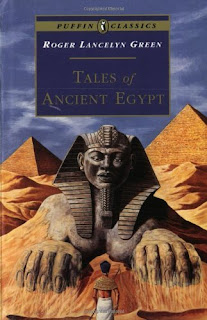 First sentence: "Before the land of Egypt rose out of the waters at the beginning of the world, Ra the Shining One came into being."

Publisher's Summary:  "These stories include the great myths - of Amen-Ra, who created all the creatures in the world; of Isis, searching the waters for her dead husband Osiris; of the Bennu Bird and the Book of Thoth. But there are also tales told for pleasure about magic, treasure and adventure - even the first ever Cinderella story."

Acquired:  Purchased a used copy from a garage sale.

Reason for Reading:  Read aloud to my 12yo son.

I grew up reading assorted Puffins of myths, legends and fairy tales by Roger Lancelyn Green.  I especially remember one called The Book of Dragons.  I'm thrilled to see that this title about Ancient Egypt is still in print and even available on ereader! Starting with a Prologue which sets the stories in historical context and gives the reader basic information on the geography and mythology of Ancient Egypt; the tales are then divided into three sections: "Tales of the Gods", "Magic" and "Adventure".  All throughout the stories we learn the mythology of the Ancient Egyptians.  We also learn a great deal of history as almost every story is set within the reign of a certain Pharaoh.  Egyptian tales are uniquely their own, some tend to be myths (legends of the gods) while others lean more towards fairy tales (stories of peasants, princes and magic) but the Egyptian tale is unlike any other read before because they grew up mostly in isolation from the influence of other cultures.  Green is a superb storyteller and one simply cannot go wrong with reading his rendition of these tales (or any tales).  We enjoyed every single story in this book.  My son enjoyed the most "The Book of Thoth" in which Setna, son of Ramses the Great, a great magician sets out to find this magical book which will give him the enchantments of heaven and earth, and know the languages of man and beast.  It is one of the longest stories in the book and has the repetition of the fairy tale along with magic and revenge.  For me, I particularly found  "The Treasure Thief" of interest a this is a tale of Helen of Troy.  Not exactly a retelling as it skips over the entire Trojan War but deals with Helen in the before and after and offers up an interesting, purely Egyptian take on how the gods may have interfered for her right from the start.  Mythology fans must read Roger Lancelyn Green.