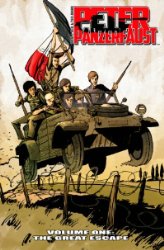 Publisher's Summary: "The first volume of PETER PANZERFAUST, the critically acclaimed reimagining of the Peter Pan story set in the backdrop of World War II France. Peter leads a band of orphans in their desperate attempt to escape the city of Calais as the Nazi army presses its advance deeper into the country. With impossible odds against them, the Lost Boys survive a series of dangerous adventures on their road to Paris, and to freedom."


Acquired: Received an egalley from the publisher through NetGalley

Reason for Reading: I like WWII stories and I like reimagined fairy tales.  This appealed to my tastes.

This is a very well done historical tale of a group of French orphans who survive the blasting of their orphanage in Calais.  As they are trying to survive and decide what to do next they meet a charismatic American boy, Peter, who readily takes charge of the group and they set off to first just escape Calais, then later head to Paris where they assume they will be safer.

The dynamics of the children are good.  They are all around the same age 14-16, some being leaders, others followers, some more gung ho while others are more timid and afraid.  A well-rounded group of kids.  Peter, however, is a bit larger than life.  He seems to have no fear, thrives on it actually and just naturally becomes the leader with little resistance from anyone.  He doesn't have super abilities but he comes out unscathed where it seems impossible.

The elements of Peter Pan have been wound into the story well.  Of course there is the obvious leader Peter, the thinking of the orphans as Lost Boys, the eventual rescuing of the Darling children, but there are more subtle ones as well.  Peter mentions his looking for a woman named "Belle" before the war started, in one scene as Peter crosses a room that is being riddled with bullets his shape is left upon the wall, ie his shadow, their are instances when Peter "flies", Wendy has dreamt of being able to live in a Neverland and so on.  An enjoyable story with its connections to the Peter Pan tale; there is no magic in it and I hope future volumes continue that way, but it is obvious there is something not quite right about Peter and it will be interesting find out what his mystery is.
Labels: 2012 graphic novel historical fiction WWII YA