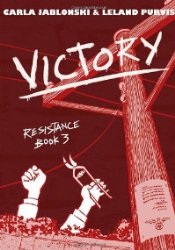 Publisher's Summary:  "The final installment in Carla Jablonski’s Sydney Taylor Honor-winning Resistance trilogy.
World War II thunders to a conclusion in this third and final installment of Jablonski and Purvis’ critically-acclaimed historical trilogy. As the Allied Forces move to retake France from its Nazi invaders, siblings Sophie, Paul, and Marie Tessier must risk their lives once more and journey into the belly of the beast: Paris. They are on a mission to deliver top-secret intel for the Resistance movement . . . they are its youngest agents."

Reason for Reading: Next (and last) book in the trilogy.

This is the final installment in this stellar trilogy about the resistance movement in occupied France.  This third book brings us up to the last days of occupation and the final liberation of France.  Tensions run high in the Tessier household as we see many different ways in which people did their part to survive and resist.  The entire household is vocally fed-up with the aunt's collusion with the Germans. Sophie is torn between her feelings for her German "boyfriend" as a person while she uses him to gather information. Paul is frustrated with his inaction and becomes more actively involved in the Resistance with drastic life and death results.  The mother is becoming friendlier with the Germans to obtain sources for her family's survival and faces accusations from her children.  Marie, the youngest, feels helpless, until an injured Allied airmen falls onto their property and she finally feels fulfilled with her part in the war effort.  Everything comes to a grand climax as Paul goes to Paris to deliver an important message from DeGaulle and meets someone from the past.  Excellent volume, reads nicely as a standalone as well.  Both starts and finishes with short essays on factual events to place the story in history.  Fantastic ending to this trilogy.