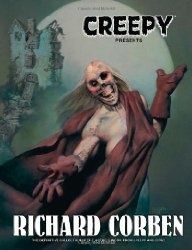 Publisher's Summary:  "Over 300 pages of timeless terror from a master storyteller! Horror comics visionary and coloring pioneer Richard Corben has been a voice of creativity and change for over four decades. For the first time ever, Corben’s legendary Creepy and Eerie short stories and cover illustrations are being collected into one deluxe hardcover! With an informative foreword by artist and comic book colorist José Villarrubia—who also provides color restoration—this volume features Richard Corben’s original stories, Edgar Allan Poe adaptations, and collaborations with cast of comic-book writers.

* The first collection of all of Corben’s legendary Creepy and Eerie stories!"


Acquired:  Received an egalley from the publisher through NetGalley.

Reason for Reading:  I used to love these horror story comic collections when I was a young teen and I believe I may have read some of this title's single issues but I am sketchy on which comics I did actually read, except of course "Tales from the Crypt", that I distinctly remember.

A fabulous collection of short horror stories from both Creepy and Eerie comic magazines.  The stories were originally published through the years 1970-1982.  They are both in black/white and in full colour, probably a fair representation of both are included.  I must profess a preference for the black/white stories as the use of shadowing is much more terrifying, or at least creepy, to me than the bright redness of blood and gore when colour comes into play.  Other reviewers talk about reading these original comics when they were 8,9,12 and while I see no problem with that as there are certain children who love to have the pants scared off them.  My age recommendation is older because I am concerned about the hugely buxom women and eventually totally frontally naked women with a strategically placed object in the groin area.  The violence is quite violent also and the stories pretty freaky.  That said, they are a whole barrel of fun for the appropriate age group.  I undoubtedly had a lot of fun with these eerie, creepy stories that compare to "Tales of the Crypt" or "Twilight Zone", if you've never read this kind of thing before.  Richard Corben's art is delicious and he certainly deserves a collection of his own.  It's a pleasure to read all these stories (some of which he did write) and find the same consistent quality artwork throughout.  As to the quality of the stories, they vary.  There are three well done retelling of Poe stories, near the end we have a couple of episodic stories which carry over for about three parts each and these were very good.  There are stories about monsters, werewolves, madmen, serial killers, ghosts and plain old weirdos.  I'll admit there were 2, I think, that I didn't "get", a couple that made me chuckle, and quite a few that made me think "sweet" at their unsettling endings.  I don't particularly have a reason why but I did find myself enjoying the last half of the book containing the stories from the "Eerie" magazine better than the "Creepy" issues for some reason.  A whole lot of fun and this volume is a good price, especially compared to the hefty price of the Creepy Presents Archive volumes.  I'd love to collect these but price is definitely  a factor for me and will drive me to the library, unless they come out with trades at half the price.  But this special volume is priced to sell!