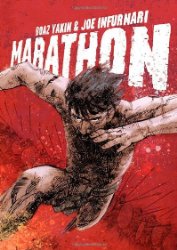 Marathon by Boaz Yakin. Art by Joe Infurnari (US) - (Canada)

Publisher's Summary:  "The epic tale of the original marathon runner—just in time for the 2012 Olympic Games
It was a turning point in ancient history.
It inspires men to greatness.
It was the foundation of one of the greatest and most prevailing global peace efforts of the 20th century.
It was the greatest feat—and the tragic death—of a man whose legacy will never be forgotten.
In 490BC, an Athenian messenger named Eucles ran 153 miles from Sparta to Athens, and in so doing preserved ancient Greek civilization from subjugation to the Persian Empire.
This is his story."

Reason for Reading: I love Ancient Greek history and the many legends associated with current day events.  I had just finished reading about the Persian conquest of its great Empire at this time (to my son) and this story serendipitously ended up being a logical progression of my reading.

I had a few problems with this book, but I first want to say that it is a very good book.  My main problem is my own; I do not really have a head for the military,  logistics, co-ordinations, planning side of war and "Marathon" presented the Battle at Marathon, and the previous battles which led up to it very much so in this militaristic way.  Honestly, it bored me to a degree, truthfully, because it went over my head.  However, there was some character development in this early part of the story to keep me reading.  The vicious tyrant Hippias of Athens' character is set during this introduction while he has his young b*stard son beheaded for losing a race to a slave.  His actions only get worse from this point on.  Eucles, the main character, is that slave who won the race, and the fear that drives him is shown throughout the book; the fear changes over time as those fears come true and are replaced by new ones.  Hippias obviously the villain is not meant to be likable but Eucles is also a man of little dimension and few characteristics that he is hardly likable as a real person either.  When the warring reaches the point of the Battle at Marathon and Euclid is put to his test, that he has become famous for, the story shifts somewhat and becomes more concerned with two characters and less so on military strategies, though they still play a big part.  But now we are allowed inside these men's heads and the story becomes more personal as we learn of that famous messenger run to Marathon, which has been honoured at the Olympic Games with the Marathon run since 1896.  The book is very brutal with violence.  The publisher recommends ages 12+ but personally I recommend ages 16+ for the brutal violence and language, as well as the maturity of the subject matter.  This book will be best appreciated by those who enjoy military battle minutiae.  As to the artwork, I found it very complimentary to the text, done in a quick sketch style with added details here and there.  The sepia tone throughout adds to the feeling of the ancient time period.