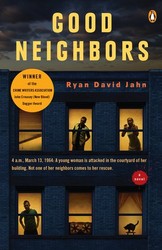 First sentence: "It begins in a parking lot."

At 4:00 A.M. on March 13, 1964, a young woman returning home from her shift at a local bar is attacked in the courtyard of her Queens apartment building. Her neighbors hear her cries; no one calls for help.

Unfolding over the course of two hours, Good Neighbors is the story of the woman's last night. It is also the story of her neighbors, the bystanders who kept to themselves: the anxious Vietnam draftee; the former soldier planning suicide; the woman who thinks she's killed a child and her husband, who will risk everything for her. Revealing a fascinating cross-section of American society in expertly interlocking plotlines, Good Neighbors calls to mind the Oscar-winning movie Crash, and its suspense and profound sense of urban menace rank it with Hitchcock's Rear Window and the gritty crime novels of Dennis Lehane, Richard Price, and James Ellroy."

Reason for Reading: I was so impressed with the author's latest book, The Dispatcher, that I just had to read  this, his first book.

I'll start off by saying I undoubtedly enjoyed this book, not as much as Jahn's second book, but I'm still quite impressed.  They are two very different types of books though.  While The Dispatcher is most definitely a thriller written at a fast past.  Good Neighbors is hard to classify into a genre and while it only takes place within one night it moves forward slowly.  This is not a bad thing though.  The book is definitely a crime.  A woman is attacked, stabbed and raped in the courtyard feet away from her apartment block.  But many more crimes take place also, some illegal, some immoral, some omissions of error and yet all are considered crimes against natural order.  What this book mostly does is take a look at a true to life crime, the real-life murder of Kitty Genovese , and imagine how her death could have happened as it did surrounded on all sides by apartment blocks.  Jahn goes inside the heads of these people who stand and stare at what is happening below them in the courtyard, some not realizing the gravity of the situation, others realizing it, but everyone assuming someone else has already called the cops so why should they as they'd only become involved and have to answer questions about their own lives.  And you see everyone has secrets in their own lives.  None of these people are truly "bad" but none of them are without sin either and they'd rather not have to answer embarrassing questions.  The book focuses on a handful of people and couples who all have something quite important going on that evening that overshadows the event happening down below in their courtyard.  They are too wrapped up in themselves to even notice the outside influence.  Then there are others who don't live in the complex but are/or will be connected by book's end who also are having to deal with life threatening issues before they are placed in a position to be of any service to the wounded girl.

Mostly this book is a study of characters, a slice of life from the mid 1960s and deals with social issues and taboos of the times such as: black/white racial tensions, crooked cops, police cover-ups, mixed marriages, serial killers, homosexuals, euthanasia, Vietnam War.  The book was not what I had expected (a mystery/thriller) but I ended up absolutely entertained with the psychological insight into the minds of these people from another time and also the effects that mass shock will have upon people.  It is a study into the minds of the times and gives a great slice of what 1960s American culture was like.

This is one of my favourite types of books; multiple characters with separate stories where the point of view switches between them rapidly until slowly towards the end connection are made.  A fascinating story. I will be on the lookout for Jahn's next book.
Labels: 2009 crime historical fiction racism