211. The Bionic Man Volume One by Kevin Smith 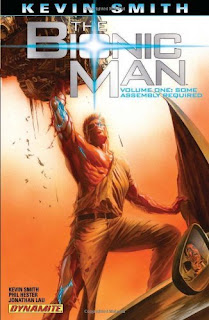 Some Assembly Required by Kevin Smith & Phil Hester. Art by Jonathan Lau (US) - (Canada)
The Bionic Man, Volume One

Publisher's Summary: "We Can Rebuild Him! Steve Austin is back and acclaimed filmmaker Kevin Smith unleashes his high-octane vision in this new series from Dynamite. Smith unleashes The Bionic Man into the 21st century as only he can, with an innovative take on this classic character that will show you The Bionic Man with a whole new set of powers and abilities - not to mention enemies! Kevin Smith is joined by Phil Hester, artist Jonathan Lau, and cover artist/character designer Alex Ross (the team that brought you the new Green Hornet series).

This trade paperback collects the ENTIRE critically acclaimed 10-issue story, along with a complete cover gallery."

Reason for Reading: I loved the six million dollar man as a kid.  Had to read this.

The Bionic Man still costs $6 million, only with the addendum of /per day.  This is a serious re-imagining of how Colonel Steve Austin became the Bionic Man and his first assignment.  When most trade collections contain 5 comic issues, we are getting good bang for our buck here with the complete first 10-issue series combined in this trade edition.  I enjoyed every minute of it.  Everything fans loved about the past show is still here, minus the cheese.  Steve has a red tracksuit for fan's to savour that iconic look, though he barely wears it.  Jamie is his fiance, thankfully, so we are spared re-running the agony of that old love story.  Steve is a tough old guy, older than he would have been in the TV series but not too much so.  The author has managed to maintain the same type of sarcastic, snide, tongue-in-cheek without being rude humour that the original character had.  This makes him totally lovable and I'm hooked.  Tons of action, quite gruesome at parts, the main characters are given some background and one looks forward to getting to know them even better.  As far as art, the artist hasn't tried to make the characters look like the actors from TV, though he has kept them the same physical types.  The only one who actually reminded me of his TV counterpart was Oscar Goldman.  If you were a fan of the show back in the '70s, this modern adaptation is sure to please!