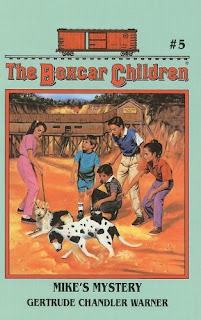 First sentence: "The four Alden children could hardly wait to get back to Mystery Ranch."

Publisher's Summary: "The excitement begins when they meet their old friend, Mike.  When Mike is blamed for starting a fire, the Boxcar children know he's innocent.  But can they discover who's really behind Mike's Mystery - before it's too late?"

Reason for Reading: Next in the series.  I am collecting the first original 19 books of this series.

Mike's Mystery could probably be said to have the first full blown mystery for the children to solve.  All the previous books "mystery" was simply finding out the identity of mysterious strangers but this time we have a crime: arson, a witness: Mike's dog, and a couple of clues: a blue hat and a picture in a newspaper.  We get a sense of real detecting going on for the children now.  Mike's Mystery is also the first time that a book in this series is dependant on another in the series.  This one is a direct sequel to book #4, Mystery Ranch, and will be enjoyed much better having read them in order.  Also, one of the main characters returns from book #2, Surprise Island, and again this benefits readers who have read the books in order, otherwise many references to previous exploits will by lost upon them.  The series is shaping up at this point into an ongoing adhesive collection, rather than just individual stories.

This story is typical fare for the series, much better than the last book and fun to see a proper mystery unravelling for the children this time.  Exactly one year has passed since the last events happened and the Aldens return to the Mystery Ranch to find many changes have been made over the school year.  A large cast of characters this time, though the majority of them have already been met in the past books so nobody new to really get to know.  Benny and his friend Mike shine as the major characters in this book, even though everything is still much a group effort for the Alden children, focus is allowed to drift more often towards the littlest brother.  A satisfying entry in the series.