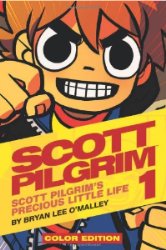 Publisher's Summary: "Just when you thought you knew all there was to know about Scott Pilgrim comes Scott Pilgrim Color Hardcover Volume 1: Precious Little Life! The first in a series of brand-new hardcover editions, this remastered, 6"x9" hardcover presents Scott's first "evil ex" battle as you've never seen it before - in full-color! Plus, previously unpublished extras and bonus materials make this mighty tome one that's required reading for Scottaholics everywhere!"

Reason for Reading: I've really paid no attention to the hype about this series, never seen the movie, nor do I know what it's even about.  But I did intend to give it a try someday, seeing as the author is Canadian and since I had the chance decided now was the time.

I didn't *love* this and at first wasn't even all that lukewarm to it either but as the book progressed I became more interested in Scott and then eventually Ramona, until at the end I knew I would read the next book.  I was put off with all the h*m*s*xual references and jokes.  Is that all a gay character is for?  Of course, the lifestyle of these 23-25 year olds was not what I would call edifying either.  The publisher recommends this for ages 13+ but I personally give it a recommended 18+.  Any 13 year old of mine won't be reading about young 20 year olds going to bed with each other.  There is one highschool student in the book (a 17yo) but she is brought into the college/young adult world.  Not a book for children, imho.

Once I got over this stuff, and got used to it, as I did think this was going to be a book about and for highschoolers, I found myself getting attached to Scott Pilgrim and several of the other characters such as Kim and Ramona at this point.  The story is quite out there with a video game theme whereby Scott has to defeat Ramona's past 7 evil boyfriends to win the right to date her.  In fact there is a lot of little bitty "out there" references that are made and plot points that happen so the reader, especially this one, became more and more intrigued the further she reads on.  When I first started, I couldn't see myself really liking this book, but now that I'm finished I certainly want to read next book!  The colour was nice but I don't want to wait that long to read them all so I will continue on with the black & white editions.