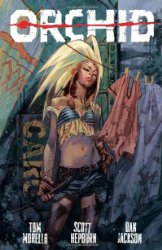 First sentence: "When the seas rose, genetic codes were smashed."

Publisher's Summary:When the seas rose, genetic codes were smashed. Human settlements are ringed by a dense wilderness from which ferocious new animal species prey on the helpless. The high ground belongs to the rich and powerful that overlook swampland shantytowns from their fortress-like cities. Iron-fisted rule ensures order and allows the wealthy to harvest the poor as slaves.

Delve into the first chapter of Orchid, the tale of a teenage prostitute who learns that she is more than the role society has imposed upon her."

Reason for Reading: On impulse actually. I've just re-read the publisher's summary and I think that last paragraph was missing from what I first read as "teenage" prostitute does not appeal to me at all.  However, for some reason, this called to me.

I am so glad I read this, rather unusual for me, graphic novel.  Very violent, quite graphic in s*xuality, language and plain brutal images.  The publisher recommends age 14+.  I'm age 40+ and was disturbed by some images; my recommended age is 18+.  So I start with these caveats but let me tell you this was a fantastic story!

It did start off a bit shaky.  The premise is somewhat unbelievable as to how this post-apocalyptic world came to be along with the mutant DNA animals. Also I'm a bit tired of assuming that future worlds will be medieval-like and women will revert back to being used, abused "property" of men.  But.  Suspending belief to a degree and getting comfortable within this world with the first couple of issues, by the third issue the story has picked up and proves to be an extremely detailed, intriguing, highly developed plot.  There are many side stories along with the major plot taking shape within this first volume and I was completely hooked by the end and am anxious to read volume 2 which has been added to my pre-order titles.

The characters are fantastic especially Orchid and the main male character, Simon.  Orchid (who I never thought of as "teenage" but had rather set her as 20-21 in my mind) starts off weak, and a bit whiny, but her character grows throughout this volume to become the hero she is going to be for the future of the series.  Simon really shined for me.  A slave who learned to read, he speaks rather "bookish" and pompously compared to the general population; he is an idealist who thinks the world is the way he wants it to be.  He is a hero but also adds a much needed comic relief to the otherwise dark, brutish nature of the rest of the story.

I really can't say how much I enjoyed this story.  I'd even be tempted to buy the comics and I don't "do" individual comics! Highly entertaining and promises to be an above average epic.