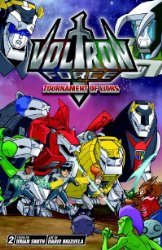 First sentence: "Cadets, fall back! Do not engage!"

Publisher's Summary: "When a cargo ship in deep space sends out a distress signal, it’s the Voltron Force to the rescue! But without warning, Daniel, Larmina and Vince find themselves fighting the greatest warriors in the galaxy for the right to pilot the Voltron lions!"

This volume starts out right in the middle of the action and doesn't let up until the end.  Each battle moves forward onto another problem which brings our heroes out fighting for justice once again.  There is a brief overture in the middle where the cadets are taken into a "Hunger Games" type of contest as the Elder's Council wants better representation on Voltron Force, namely their own candidates.  King Lotor continues to hide in the background as the villain and in this volume he picks up an ally.  Great, fast-paced, hard to put down manga for superhero/cartoon show fans.
Labels: 2012 children manga superheroes